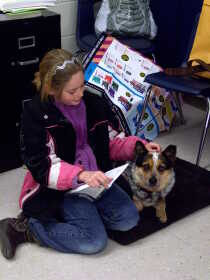 ROACHDALE -- Elementary school can be a fun experience for kids, but there are numerous daunting challenges as they learn not just reading and math, but to socialize, become responsible and cope with stress.

The staff at Roachdale Elementary has helped kids overcome these issues the same way many parents do. They gave them a dog.

McMurty and Taylor had various experiences with therapy dogs in the past and thought they would be good for the school.

"They brought the program to me," Principal Scott Spencer said. "It didn't take a lot of convincing."

Spencer said he first learned about the benefits of therapy dogs when he was visiting a relative in the hospital a few years ago. A dog came in during a stressful time and changed his mood.

When the program began, he hoped that would carry over to a school environment.

The idea was presented to the school board last April. There were questions, but they agreed to let the school try it for the rest of the year.

Then they brought it back for the fall. 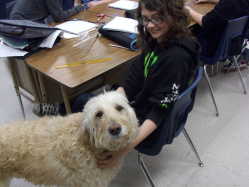 Easing her own stress, Lilly Brown (above) plays with big Lucy during a break in class.

Much of the impact comes from the students' belief that having the dogs there helps.

Students in Taylor's class raved about the pets:

If I'm stressed on a test, she knows.

She sticks her head under your arm to make you better and it calms you down.

I pet her and keep working.

I always get so stressed over tests. Especially the ISTEP.

The kids had only two real complaints. One, that big Lucy barks during a thunderstorm, actually sounded more like running joke.

The other, that she sometimes smells bad, didn't seem to be a distraction for the students.

The dogs occasionally come to recess where they play fetch and ride down the slide with the kids.

"It's really neat to see them take turns," McMurty said. "There's no pushing or shoving. They wait in line."

Taylor's dogs, a hypoallergenic mix of golden retrievers and poodles, stay with her class most of the time. The dogs alternate days in the classroom and at home.

They're outgoing and social, seeming to sense stress and working to calm the mood. They're quick to welcome strangers and are comfortable in the crowd.

Big Lucy and Max calm the room but rarely, if ever, distract from the lesson. They make her students, and those in the rest of the building, happier.

Taylor said there are even some younger kids that make a special trip to her room every day. She gets to know kindergarteners, and they get to know her.

The dogs have also helped with curriculum. Her students have written letters to the school board and the principal for the last two years, building on lessons in persuasive writing.

McMurty's dog, a breed used for herding cattle in Australia, is more quiet and loyal to one person.

When the program started last year she tended to let kids approach her, though she's begun opening up now.

When he goes to a classroom to give a lesson, little Lucy goes with him. He sometimes uses playing with the dog as an incentive for students who reach goals.

There is one teacher who doesn't care for dogs, so McMurty avoids that room. There is a student who is allergic, so the dogs don't go near him.

The dogs play an important role in teaching as well.

Kids who are uncomfortable or unconfident reading in front of a class are sometimes willing to open up to a dog.

McMurty shows a video of a student reading aloud to little Lucy. The ADHD student maintains focus as he reads a full page.

"A kid can sit and read to a dog, and the dog is not going to judge them for it," Spencer said. "It can help boost their confidence."

When a student came to McMurty on Thursday, angry and upset and crying, little Lucy helped to soothe the situation.

Tangible effects from the therapy dogs are hard to calculate.

According to ABC News, a 2010 University of California, Davis study confirmed students who read aloud to dogs improved reading skills by 12 percent.

Roachdale has tracked a few kids on measurable items like test scores, disciplinary reports and attendance records. The results are encouraging but inconclusive.

Half of the kids showed improvement, the rest stayed the same, but in a small sample size those numbers don't mean much.

The initiative, Spencer said, is not necessarily about the measurables.

"It's really the intangibles," he said. "It's just like being home. It adds to that home environment."

At no cost to the school, any improvement is notable.

The faculty who brought the dogs in, McMurty and Taylor, each paid to have their dogs certified.

Each brings the dog food and treats. Each takes care of the dog's waste. There haven't been any accidents in the building.

The dogs are all certified, having passed tests for sit and stay commands, walking by food without eating and being able to be left alone for portions of the day.

If a dog has ever bitten someone, or ever been in a fight, it is disqualified from the program.

Spencer plans to bring the program back next year, likely at the same level it is now.

"What we have right now is filling our need, if there is a need," he said. "If we were to expand we would want to go slow."

The dogs seem here to stay. That's just fine for faculty members who have seen them in action all year.

"The kids say it helps when they have troubles at home," Taylor said. "At first the school board was worried about distractions, but I think it's a good distraction for them."