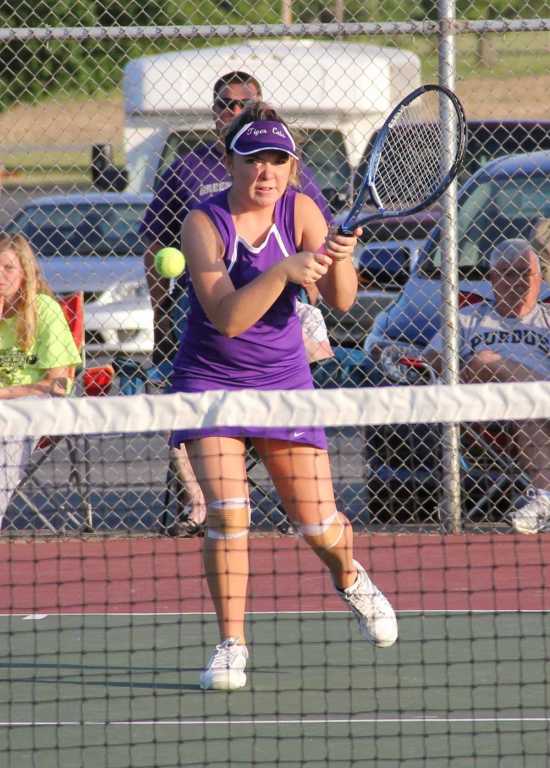 BRAZIL -- Tennis, as with most sports, is a game of inches and momentum. On Friday the Tiger Cubs learned that lesson the hard way as they fell in the IHSAA Girls' Tennis sectional final 3-2 to Northview.

With the match knotted at 2-all, the fate of the match would fall at No. 2 singles and the battle between Greencastle's Harriet Watson and Northview's Nicole Linton. Watson won the first set 7-5, while Linton came back to take the second set 6-2.

After a 10-minute break, Watson and Linton took to the court, with Watson jumping out to a commanding 3-0 lead in the third and final set. Linton won the next two games, but Watson won her fourth game and was just two games away from delivering GHS the sectional win.

Linton buckled down and started her charge. Down 4-2, Linton went on a run to tie the set at 4-all and took the lead 5-4 on a Watson double fault. In the game that would decide the match, Watson fought hard, but fell to Linton 6-4, with Northview winning the match 3-2.

Greencastle's two wins came at No. 1 and No. 3 singles. Haylie Romer continued her strong play at No. 1 singles as she defeated Haley Leach 6-4, 6-1. No. 3 singles player Kayla Chadd won her first set against Kelsey Oehler 7-5, but dropped the second set 6-4. In the third set, Chadd regained control and cruised to a convincing 6-2 victory to win the match.

The Tiger Cubs lost both of its doubles matched on the night. At No. 1 doubles, Carlie Harlan and Sabrina Arnold lost to Jenna Smith and Trisha Cox 6-1, 7-6 (7-4). The No. 2 doubles team of Bailey Brewer and Katie Burns fell to Northview's Shelby Timberman and Kaysia Reberger 6-2, 6-4.

Greencastle head coach Sally Martin delivered a heartfelt speech to her squad following the match and was too overcome with emotion to provide a comment.