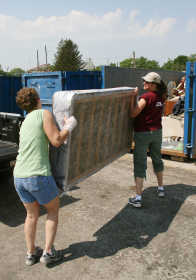 With some 500 vehicles bringing things to the Putnam County Fairgrounds for proper disposal at the West Central Solid Waste District-sponsored Tox-Away Day event Saturday, it figures there had to be some unusual items. An old mattress proves to be quite the challenge for Greencastle Civic League volunteers Tanis Monday (left) and Valerie Rudolph, while a whole bunch of additional arms and legs help hoist an old couch to the top of the dumpster. The Civic League had 25 volunteers on site to help load three full dumpsters of large, bulky waste and recyclables. More than 30 couches, a nearly complete encyclopedia set, three old radio cabinets and numerous mattresses and box springs were taken in. A 12-foot fiberglass boat was supposed to be sailing into the fairgrounds as well after a caller asked if it could be accepted, but that ship never sailed when the annual event ended at 1 p.m. 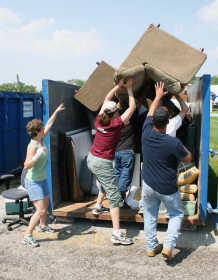