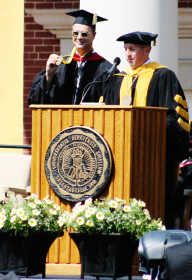 Showing off the Kilgore Medal for Distinguished Service to Journalism he just received, commencement speaker James B. Stewart Jr. (left) listens to DePauw University President Brian Casey sing his praises. Stewart is only the third recipient of the medal, which memorializes 1929 graduate Bernard Kilgore, visionary editor of the Wall Street Journal and longtime president of Dow Jones & Co.

Anywhere there are caps and gowns to be worn this time of year, the prevailing question remains: "What will you do with the rest of your life?"

Pointing out that the rest of that life would begin in about two hours, DePauw University commencement speaker James B. Stewart Jr. said Sunday morning the future holds a series of defining moments for us all.

"And today's graduation is probably not one of them," he assured the 515 DePauw seniors who participated in Sunday's ceremonies in Holton Quadrangle as the university -- celebrating the 175th year of its founding in 1837 -- conducted its 173rd commencement exercises.

As members of DePauw's Class of 2012 say goodbye to their undergraduate experiences and enter the world of work, public service or graduate school, "The world will be a better place," Stewart predicted.

"And your rewards for doing so will be immeasurable as you create lives that are singularly, irrevocably, irreplaceably and splendidly -- yours," advised Stewart, a Pulitzer Prize-winning journalist, bestselling author, New York Times columnist and 1973 DePauw graduate.

In an address titled "Defining Moments," Stewart asked, "What are they? They are relatively few. They are not the great ceremonial occasions of life, such as weddings, anniversaries, or even winning the Pulitzer Prize, memorable though these are.

"They may well be known only to you. Some come suddenly and unexpectedly, others may be years in the making. Looking back on my life," Stewart continued, "I see now that they were clustered relatively early, but they have continued, and I don't know how many more lie ahead."

A defining moment "thrusts a decision upon you," he added, "one that will alter the course of your life. It will define who you are, what you achieve, how you feel about yourself, and how you will be remembered.

Meanwhile, four individuals -- including three DPU alumni -- were presented with honorary doctorates during the sun-drenched ceremony.

In presenting Timothy H. Ubben and Sharon Williams Ubben with honorary Doctor of Public Service degrees, President Casey told them, "Your tireless service for your alma mater continues to enrich this campus, with support for faculty, support for student financial aid, and a lecture series -- the Ubben Lecture Series -- that affords the members of this campus the opportunity to engage with the greatest leaders in the world," 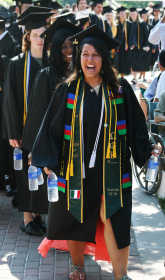 With highs in the upper 80s forecast for Sunday, members of the DePauw University Class of 2012 came well equipped with bottled water as they made their way to seats on Holton Memorial Quadrangle for the university's 173rd commencement exercises.

Also honored during the ceremony were David N. Baker Jr., distinguished professor of music and chairman of the jazz department at the Indiana University School of Music, and Sara Lennox, director of the Social Thought and Political Economy Program (STPEC) and professor of German and Scandinavian studies at University of Massachusetts, Amherst.

Amy Goodman, host and executive producer of "Democracy Now!", was slated to receive an honorary degree Sunday, but work duties kept her from attending the ceremony.

Also addressing the commencement gathering was Nicholas "Nic" Flores, a graduating senior who spoke about "the DePauw Experience." Flores is the 2012 recipient of the Walker Cup, awarded to the senior who has contributed the most to the DePauw community during his four years on campus.

"As we leave this place that has been our home for four years," Flores said, "I invite you to embrace the activist history of DePauw, shake off apathy, engage the world, determine which is the main danger, and do something to change it.

"As DePauw students, every single one of us has been introduced to people and ideas that have challenged us to critically reflect on our lives and actions," added Flores, an anthropology major and vice president of student government.

"When we think about how we are going into the world soon, remember that we have this obligation to push forward, enact change, and a make positive difference," he said. "This doesn't always mean having the loudest voice, but finding the power of your own voice and enhancing the voice of others."

Flores concluded by saying, "At DePauw, we have been given the skill set to find our voice. We are reflective. We are aware. We are collaborative. We are responsible. We are engaging. We are critical thinkers, and most importantly, we are ready."