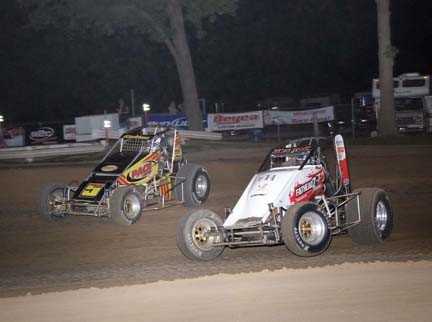 PUTNAMVILLE -- One night after a disappointing outing at Bloomington Speedway in the "Larry Rice Classic" AMSOIL USAC National Sprint Car event left Wes McIntyre two spots out of a transfer spot in the B-main, "Wes Mac" washed away that feeling with a trip to victory lane at Lincoln Park Speedway.

McIntyre got past Chase Briscoe eight laps into the A-main to take the point and then held off a spirited challenge from Shane Cottle over the final laps to put his No. 83 sprint car in the winners circle. Cottle placed second to Bobby East on the red clay of Bloomington Friday night.

In the modified feature, Craig Conyer took advantage of some late mechanical problems by Paul Bumgardner to pilot his machine across the finish line first ahead of Chris Brewer and Kenny Carmichael Jr., who came up from a 14th starting position.

Twenty-eight sprint cars were on hand Saturday night as McIntyre started his night off on the right foot by winning the opening heat race. Dakota Jackson and Matt Goodnight followed suit to place themselves up front for the A-main. Chris Babcock cruised away to win the B-main.

When the green dropped on the feature it was Chase Briscoe duking it out with McIntyre over the opening laps ahead of Danny Holtsclaw, Josh Burton and Goodnight. Cottle quickly moved up to take on Holtsclaw as a four-way battle for the fourth position developed.

Following a caution five laps into the feature, McIntyre made his move as he slid past Briscoe for the top position. Behind them, Burton had his hands full with the charging Cottle as Jon Sciscoe and Brent Beauchamp in the mix gave chase. Holtsclaw slowed to bring out a caution with 10 laps in the book.

When racing resumed, McIntyre began to open a gap as Cottle threw a big slider into the second position and set his sights on the front. Briscoe remained in third ahead of Burton, Beauchamp, Goodnight and Jackson as a final caution slowed the race with eight laps remaining.

McIntyre took the green and looked to have the race locked up with two laps to go, but Cottle had one more challenge left on the final corner, but couldn't make the pass. Briscoe came home third ahead of Beauchamp and Burton in the top-five. Goodnight, Jackson, Logan Jarrett, Jamie Frederickson and Chris Babcock rounded out the top-10.

In the UMP Modified feature, Bumgardner started on the pole after placing second to Wes McClara in the first heat race. Jaymie Turner captured the second heat with Carlos Bumgardner starting outside row one after winning the final heat.

Paul Bumgardner took the green and held off a couple of challenges from Craig Conyer over the first half of the feature before beginning to open up some breathing room. Behind him, Conyer held down second with a four-way battle behind him as Carlos Bumgardner and Brewer were door-to-door ahead of Kenny Carmichael Sr. and Carmichael Jr. fighting for fifth. As Bumgardner began to pull away from Conyer, Brewer settled into third with both Carmichael's fighting for position along with Chad Combs.

A late caution with eight laps remaining simply looked to delay the inevitable win by Bumgardner, who was flawless up front. However, he slowed under the caution and came to a stop in turn three before being pushed back to the pits with a disappointing 16th-place finish.

Conyer wasn't going to let the good fortune slip away as he took the green and led the final eight laps for the victory ahead of Brewer, Carmichael Jr., Eric Varner, Carlos Bumgardner Sr., Carmichael Sr., Scott Ricketts, Combs, McClara and Larry Lambert.

In the UMP Super Stock feature, Shoulders started outside of row one alongside David Bumgardner with Christian York and Carmichael Sr. However, it wasn't long before the starting field began to drop off.

Bumgardner came to a stop early on and went to the pits, York got loose and spun in the opening laps and restarted from the back. Doug McCullough started fifth, but pulled to the pits early along with AJ Smith.

At the front of the field, Shoulders and Carmichael were within a car length of each other nearly the entire feature. Carmichael was looking to make the bottom work over the first half of the A-main, but was unable to get past Shoulders. Over the second portion of the race, Carmichael went to the top and challenged Shoulders briefly as Roy Bruce Jr. charged into contention after starting 11th. Kris Starks made a nice run through the field to get into the sixth spot after getting by Steve Sheeks.

Shoulders opened up a couple car length lead over the final few laps as Bruce and Carmichael battled to the finish line with Bruce edging into second at the line. Starks moved up to fourth as Travis Heramb came from the back to take fifth ahead of Slick Griffin, Sheeks, Josh McDaniel, JR Watkins and Steve Ware.

In bomber action, Michael Harris, McCullough and Bryan were heat race winners as Megan Cavaness took the B-main, which was marred by a nasty crash between Daniel Foxworthy and Ron Smith. The resulting accident left Foxworthy's car inverted with Smith's parked on top. Smith would walk away from the incident as Foxworthy was transported via ambulance to be examined.

In the evening's final feature, Tony Tidwell started on the pole, but McCullough took the lead early ahead of Harris and Josh Settles, who was sidelined after losing his brakes. McCullough and Harris were side-by-side ahead of David Wallen and Bryan followed by Mike Moody and Bill Brewer.

McCullough was able to edge ahead as Harris got caught in lapped traffic, but Bryan was flying to the front and caught McCullough down the stretch. Bryan made the pass for the lead over the final laps as McCullough settled for second ahead of Harris, Wallen and Kenny Tidwell. Moody, Josh Presley, Tom Tidwell, Brewer and Cavaness wrapped up the top-10.

Next week will be a regular show of sprints, modifieds, super stocks and bombers.