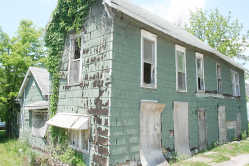 Despite the graffiti, the cost for tearing down the old hotel building in Russellville has grown.
Order this photo

RUSSELLVILLE -- The destruction of the decaying old hotel building in Russellville hit another delay last week when it was discovered that the content report for the building was missing.

The town purchased the building in early May and hoped to tear it down soon after. The plan was to then dispose of the material at Heritage Landfill, a facility equipped to handle a variety of materials.

The purchase agreement was finally completed last week and the plan was to tear down the building on Saturday, May 19.

This was called off when the town failed to provide Heritage with a content report.

"They don't care what's in that building," Council President Don Reddish said. "They can handle it and dispose of it. They just want a report to know."

The town began exploring tearing the building town a decade ago.

A previous administration had a report done in late 2002 that revealed the building to be negative for asbestos and other hazardous materials, however this report has since been lost.

Clerk/treasurer DeVon Davis said she has called the county and state to try to find the report but both places have come up empty.

The state told her that because the report is 10 years old it might be archived but not transferred to searchable microfilm.

She also reported that because the results were negative it is possible the report was never filed.

To rectify the situation the council was asked to hire a company in to survey the building and create a new report.

"I think we should go ahead and do it," council member Norma Jean Gross said. "We've come this far. It needs to be done."

The Cloverdale-based company charges $450 to file a report and an additional $25 for each sample, with a minimum of 10.

Davis said she was told the price would likely come between $600-650 total, barring unforeseen problems.

The council agreed to pay for survey as they try to get the project completed.

The cost of the deconstruction project continues to mount.

After an initial bid was rejected, Russellville decided in March to purchase the building at a cost no greater than $2,000.

The final closing cost, including clearing all back taxes, ended up being $2,148.

Council members hoped to have the vacant building leveled as soon as possible after the purchase agreement was reached to limit the town's liability.

If it doesn't collapse on its own, the recent delays mean the town eyesore is likely to remain standing until next month.