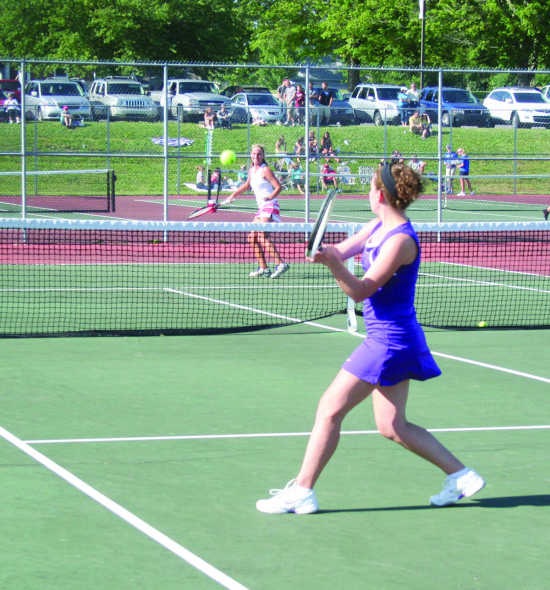 Greencastle's Haylie Romer (near court) and South Putnam's Ericka Minor faced off Tuesday at the Greencastle Regional in the individual bracket. Minor earned a hard-fought three set victoy over Romer 6-7 (3), 6-1, 6-4.
Order this photo

There wasn't much the coaches could say to Ericka Minor and Haylie Romer during the changeover of their grueling, three-set match on Tuesday, an eventual victory for Minor.

The team leaders of rival schools South Putnam and Greencastle had been there before and at the end of a long season, they each knew what they had to do.

"You don't have to talk to her too much," Greencastle coach Sally Martin said about Romer. "She knows what she can do and what she needs to do."

"I think she's won a lot of matches by being tough," Briones said. "Fortunately for Ericka, the ball fell her way."

For much of the first two sets, Romer attacked the net and played aggressively. Her slices and drop shots were difficult for Minor to handle.

While this worked in the first set, Minor's approach of sitting back, playing defensively and waiting for her opponent to make a mistake paid off in the second set.

Romer began to miss more and spent much of the set trying to return to form.

After the changeover each player mixed up her play, sometimes challenging her opponent at the net, sometimes waiting back on the baseline as she tried to open up the court.

Minor and Romer alternated games for much of the final set.

Serving up 2-1, Minor attacked the net to challenge Romer. The Tiger Cub responded with a crushing forehand into Minor's body. The Eagle responded by ripping a crosscourt volley for a winner.

A point later Romer hit a winner of her own and walked back to the baseline with swagger and confidence, though Minor eventually took the game.

The pressure mounted when Romer served, trailing 5-4. She double-faulted twice to open the game, eventually trailing 0-40.

Minor then felt the pressure shift to her, whiffing on a volley, missing an attempted reverse overhead while chasing a lob and failing at another chance at the net.

Minor took the deuce point then iced the match with a hard drop shot at the feet of an approaching Romer.

"Haylie is a great opponent," Briones said. "I knew coming in they were evenly matched."

Both players showed frustration at times during the match.

The third set was disrupted several times when balls from the next court rolled into play, disrupting the match and stopping play in the middle of a rally.

Because of limited court space, the court was being used for a full team to warm up for an upcoming match and had multiple coaches and players walking around.

The players responded to the adversity with maturity, settling back into rhythm after a point or two.

"Ericka has been really good about keeping her composer, of not getting down and just playing it point by point," Briones said. "She hung in there, as she has all year."

Romer, Martin said, has developed into a leader throughout the year by showing emotional toughness and intelligence on the court.

The players faced off earlier this year at South Putnam, a match also won by Minor in three sets.

Greencastle's season is over, but Martin said it was a success. Her young team finished with a winning record and will return all but one player, senior Carlie Harlan.

Martin said she was proud of her team and pleased with the way they carried themselves, on and off the court.

Minor advances to the next round and will play tonight at Greencastle tonight at 5 p.m