Cougars fall to Mounties in sectional 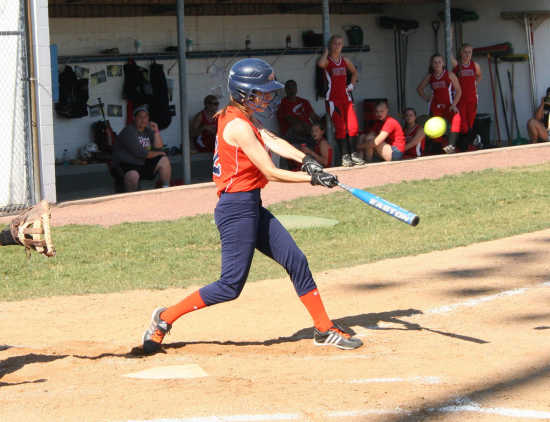 North Putnam senior Tari Straziscar singles to open the second inning of the Cougars' sectional game with Southmont. The Cougars fell 5-1 to the Mounties.
Order this photo

But Southmont's game plan finally broke through in the fifth, as the Mounties (22-5) broke open a 1-run game to put away the Cougars (4-16) in their IHSAA Sectional 25 first round game.

Three runs in the frame brought the game to its final score of 5-1.

"They saw that the weakness was the bunting game and they took advantage of it," Ault said. "They had some speed. I've watched these girls from Southmont since they were in seventh and eighth grade and I knew they were going to use that to their advantage if we didn't stop it. That's exactly what happened.

"We talk about putting pressure on teams. We did not do that, they did, and pressure will kill you," he added.

The Mounties put up an early run when Stephanie Martin took a walk from Cougar pitcher Sabrina Surber and advanced to second on a sacrifice bunt. Martin then took third on a groundout, scoring when the ensuing throw to third was wide of the target.

The Cougars tried to answer with a pair of singles from Tari Straziscar and Alyssa Roberts in the top of the second, but the inning was cut short by a baserunning error and a flyout.

They broke through in the third when Cayla Kientz opened with a walk from Mountie pitcher McKenzi Jordan. She then took third on a two-base error off the bat of Surber before scoring on a wild pitch.

The Cougars kept it tied until the bottom of the fourth, but could muster no further scoring. The only additional hit came in the sixth when Surber singled.

The Mountie offense went to work from the third inning onward, though. The Cougars wiggled out of a bases loaded, one-out jam in the third, but weren't so fortunate thereafter.

In the fourth, a double, a passed ball and an error accounted for the tally.

The fifth was worse, as the Mounties scored three on just one bunt single. However, two walks, a steal, a passed ball, a sacrifice fly and some misplays in the field did the damage.

"We tried to do the bunting too, but we have to get it down. Bunting is simple and you have to get those bunts down," Ault said.

The coach praised his three seniors, Mackensy Asbell, Bridget Johnson and Tari Straziscar. He noted the attitudes and ability to play multiple positions of Asbell and Johnson, and praised Straziscar for making the most of a chance to play varsity.

"Tari, I'm so proud of her. Three years she's played JV, and this was her year to play varsity. I couldn't ask for a girl with a better attitude and better leadership," Ault said. "I just love her to death. She's one of those girls I couldn't be prouder of, doing everything I asked her to do."

In spite of the record, the coach said the team was competitive all year, but the younger players need to learn how to put it all together.

"This is one of those teams that we could play with anybody. We played with South Putnam 3-0 at the County Tourney," Ault said. "We have mental lapses. We're going to grow and eventually they're going to get it and figure it out."

Surber and Ault; Jordan and Myers