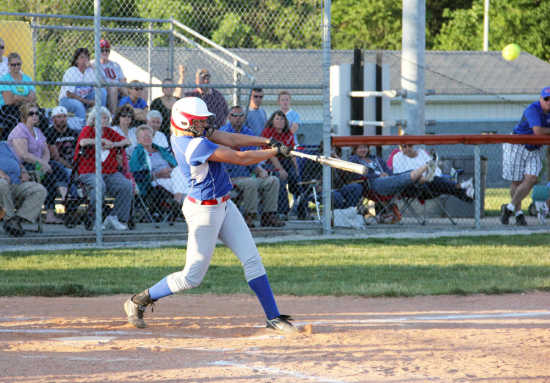 South Putnam senior Brooke Boetjer blasts a home run to left field in the first inning of Tuesday's sectional contest against Covenant Christian. The Eagles won 14-0 and will face Cascade in the sectional final today.
Order this photo

CLAYTON -- South Putnam soared into the sectional final Tuesday by defeating Covenant Christian at the Class 2A Cascade Sectional. However, the Eagles were dealt a heavy dose of reality as the game came to its conclusion.

With the Eagles leading 14-0 in the fourth inning, South Putnam shortstop Emily Dabkowski moved into position to make a routine play on a grounder when anything but routine happened. The ball took a nasty hop and hit Dabkowski in the facial area, resulting in the senior hitting the dirt in obvious pain.

After a few moments, Dabkowski was helped to her feet and made her way to the dugout with a towel to her face. Following the game, South Putnam head coach Chris Jones confirmed that it was thought his shortstop suffered a broken nose. Jones said that the plan was for Dabkowski to be in the lineup for the sectional final Wednesday.

Up to that point the game was going according to plan. The Eagles scored five runs in the opening inning, powered by a mammoth home run by starting pitcher Brooke Boetjer that plated herself and Kelsey Whitaker. Mattie Varvel, MaKenzie Trisler and Janet Crafton drove in RBI in the inning, with Trisler's RBI coming on a triple.

The Eagles continued to roll in the second inning, scoring seven runs on five extra base hits. Dabkowski hit two doubles in the inning, with Jenna Jones, Varvel and Crafton adding doubles.

South Putnam added two more runs in the bottom of the third inning to move the tally to its final of 14-0 in favor of the Eagles. Kaylin Yon closed out the game by recording three strikeouts. In two innings of work, Yon recorded three strikeouts and allowed just one hit.

Boetjer started the game, striking out seven and giving up no hits. She was pulled after the third inning to assure the senior was fresh for tonight's sectional final.

Dabkowski was 2-for-3 with two doubles, with Boetjer going 3-for-3 with a home run and three RBI. Varvel was 2-for-2 with three RBI. Jones and Crafton recorded doubles and an RBI each on the night.

In the first game of the evening, Cascade rolled to a 9-0 win over Monrovia. South Putnam and Cascade met twice this season, with the Eagles coming out on top in both contests.

Jones was pleased with the performance of his team in spite of Dabkowski's injury and the team ended the game with only eight players in the field due to substitutions and players re-entering.

South Putnam will face Cascade for the sectional title tonight at 6 p.m. at Cascade