City pool will open on time Saturday after lift delivery 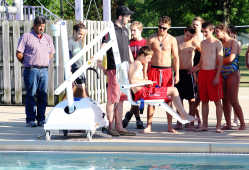 With 90-degree weather on the way for the weekend, Greencastle residents may find some relief in sight as the Aquatic Center will open the 2012 swim season on time after all.

A new portable poolside chair lift -- as required by Americans with Disabilities Act (ADA) -- has arrived, and all systems are now go for the pool to open as scheduled this Saturday.

"The lift is in, and the lifeguards will be training with it in anticipation of Saturday," Park Director Rod Weinschenk said.

That's good news for the aquatic center since in recent days and weeks it appeared the lift would not be delivered on time after it was initially back-ordered. It was expected the handicapped-accessible lift might be a week or 10 days late in arriving for the start of the 2012 pool season.

The Greencastle Parks and Recreation Department ordered a $6,739 portable aquatic lift through Spear Corp., Roachdale, which has been helping the city meet ADA requirements at the local aquatic center. The lift also comes with a spine board attachment and a cover.

Changes to the Americans with Disabilities Act in 2010 mandate that public pools must be upgraded with chair lifts, essentially mini-cranes that slowly lower wheelchair users into the water. While initially the deadline had been March 16, confusion over details and pool operators' pleas for more time caused the Justice Department to push it back to May 21.

And now comes word the deadline has been extended even further, although Greencastle no longer has to worry.

"President Obama has extended the deadline for compliance to Jan. 31, 2013," Weinschenk said. "We are now a step ahead."

The portable lift is being added to the deck along the edge of the pool where the water is precisely four feet in depth. Thus, the lift is due to be placed at the southeast corner where the main pool area converges with the water slide section.

Weinschenk also announced that the 2012 pool staff has already undergone a change since it was approved by the Park Board at its May meeting.

Nick Stevens is now the pool manager with Sara Culler as assistant manager. Stephanie Hoffa had been named the 2012 manager but has since decided to pursue other interests, Weinschenk said.

Meanwhile, Stevens reminds everyone the pool will open Saturday for adult lap swim at 11 a.m., followed at noon by open swimming.

Meanwhile, for only the third time since the city pool opened to the public nearly 20 years ago, the cost of admission has gone up. The daily pool admission price for everyone age five and older is now $5. However, anyone four or younger will continue to be admitted free of charge.

Season passes will be available for purchase from 9 a.m. to 5 p.m. Thursday and Friday, May 24-25 and during normal hours on Saturday.

Anyone with any questions may call the Greencastle Aquatic Center at 848-1909.