North Putnam fuels up to play with the Colts 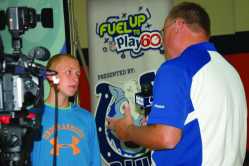 NPMS student Noah Poynter is interviewed for the Colts.com video announcing the school's Fuel Up to Play 60 championship.

North Putnam middle school students won the Fuel Up to Play 60 Challenge, a year-long health and wellness initiative sponsored by the NFL and Indianapolis Colts.

Former Colts Pro Bowl tackle Tarik Glenn was on hand to present the award, along with several Colts cheerleaders and Blue, the team's popular mascot.

The students in Joannie Knapp's eighth-grade accelerated social studies class have been facilitating the project throughout the year.

At a school board meeting in April some of the students presented some of their accomplishments and showed the video they submitted to the Colts.

The students have been active in the program since last fall.

Each day they devoted time (as the title suggests, at least 60 minutes) to physical activities -- they even created their own sport, Cougar Ball, which combines kickball and softball.

More than that, they helped educate the students and staff on the benefits of eating healthy, which led to a change in the cafeteria lunch menu.

"It was a great day for us and especially the students who put the project together with Mrs. Knapp," middle school principal Terry Tippin said. 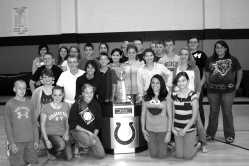 Joannie Knapp's eighth-grade accelerated social studies class, along with former Colt offensive tackle Tarik Glenn, Colts cheerleaders and Blue, pose with the Colts' Super Bowl XLI trophy and their own championship trophy for winning the Fuel Up to Play 60 Challenge.

At the meeting in April, Tippin joked about his school's chances of winning.

"The boys think the cheerleaders for the Colts are going to come out, so they were all really motivated," he said.

Blue, and the cheerleaders, presented the students with the Fuel Up to Play 60 trophy at an assembly last Wednesday. The presentation is featured on the Colts website.

In addition, each student was able to have his or her picture taken with the Super Bowl XLI trophy.

Tippin said he doesn't know if the school is eligible to enter the contest again next year but plans to compete to get fit again if there is a chance.