Big Walnut catch proves to be the real anniversary surprise 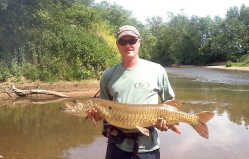 Growing up out along Saddle Club Road in Madison Township, Tim Lancaster had 200 acres of woods for his backyard and a 28-acre lake about a hundred yards out the back door west of Greencastle.

So there's little wonder he would be drawn to all things outdoors. Even his job down in Evansville is related to nature. The 1984 Greencastle High School graduate is director of technology-erosion control and marine for North American Green/Tensar International Corp., which not only fills up the business card but also utilizes his knowledge of the outdoors.

All that helps make the fish story he's about to share a whole lot more believable. And it's a whopper.

You see, Lancaster landed a 44-inch muskie -- probably the rarest of freshwater American game fish -- while fishing for smallmouth bass in the Big Walnut last Sunday.

Now that wouldn't be much of a story if he had been fishing in Wisconsin or northern Michigan, Minnesota or Canada. But this is west-central Indiana. And the muskie is considered such a challenging fish to catch, that it's often called "the fish of 10,000 casts."

The 46-year-old Lancaster was in town for a surprise 50th wedding anniversary celebration Saturday for his parents, Earl and Sharon Lancaster, who now live out on Albin Pond Road. About 3:30 Sunday afternoon -- in the heat of the day, no less -- Tim, brother Rick and nephew Nick decided to go wade-fishing in the shallow waters of the Big Walnut south of the Oakalla Covered Bridge. 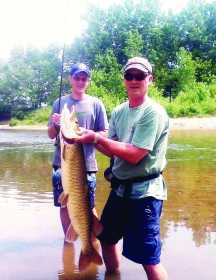 Tim Lancaster hoists a 44-inch muskie he landed last Sunday in Big Walnut Creek as nephew Nick Lancaster looks on from the water.

"Within 10 minutes of hitting the river, my nephew Nick hooked the first smallmouth of the day," Lancaster recalled.

And while Nick was busy trying to get his bass off the line, Tim cast a Rebel Crawdad crankbait into a deep pool of water along the bank, adjacent to the faster-moving main river channel.

"Within a few seconds of working the lure through the center of the pool, I felt a hard stop," he said, continuing his fish story.

Initially Lancaster assumed he had snagged a log or wedged his lure between rocks.

"But then that 'log' started pulling away," he said, "so I jerked once to make sure the hook was set in whatever was on the other end."

At that point Lancaster said he knew he had hooked something large but had no idea what was on the other end of his line.

"My brother and nephew were still near," he said, "and while my rod was doubling over in stress, we were discussing what it might be."

Their first thoughts focused on a large catfish.

"The fish had stayed well below the surface for a few minutes," Lancaster elaborated, "taking slow but very powerful runs as the drag on my reel sung that sweet song every fisherman loves to hear."

After another minute or two, Lancaster finally caught a glimpse of the fish as it turned broadside, revealing its dark stripes.

"At that point, I yelled to the guys in a surprised, yet unsure tone, 'It looks like a muskie!?'"

An estimated 20- to 25-pound muskie to be exact, as the show was only beginning to play out in the middle of the small stream.

"Not long thereafter, the fish made two or three jumps out of the water," Lancaster said, "attempting to throw the hook, and once thrusting its body completely above the surface except for its tail. Talk about a sight!"

Seeing a nearly four-foot-long fish thrashing and splashing like that reminded Lancaster of one of those TV outdoors shows on tarpon fishing or perhaps an old "It's Miller Time" beer commercial.

But landing the fish was still to be achieved.

"After 10 or 15 minutes of praying that my line wouldn't break under the sheer weight or be severed by the giant teeth on that monster, I finally pulled him into a shallow area along the sand bar," Lancaster said.

"Since we were wading, none of us had a camera handy, so Rick had to run back to the truck to get his cell phone, while Nick and I kept the fish at bay."

After quickly measuring the muskie with a tape, taking a couple photos and carefully working the hooks out of its toothy mouth, Lancaster "eased the rather worn-out fish back into the water."

None of them had a scale, which accounts for the estimated 20-25 pound weight of the catch-and-release muskie.

Lancaster put the rare catch back in the creek, and "after several minutes of coaxing, the fish finally regained its strength and slowly swam off into the depths of Big Walnut," he described.

In the aftermath, the three fishermen caught another 25 or 30 fish, including smallmouths ranging from 8 to 14 inches, several sunfish, small rock bass and little stripers.

"All in all, an excellent day of fishing on the river," Lancaster offered.

But the rarity of the muskie catch still amazes him.

"My family has fished that river for decades," he noted, "and no one has ever heard of a muskie being caught there."

So he decided to investigate further, emailing the photos to Rhett Wisener, District 4 fisheries biologist for the Indiana Department of Natural Resources.

Wisener agreed that the fish was indeed a muskie and offered a reasonable theory as to its origin.

"I suspect this is one of the nearly 2,000 muskie that were stocked in Glenn Flint (Lake) back in 2005," he told Lancaster. "That was the only year they were stocked there, so to catch one of that size seven years later downstream of the lake is quite an accomplishment and kind of surprising."

And also quite a fish story!