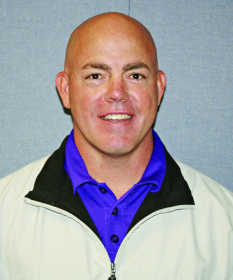 Former school board member Kelly Lewis was approved as the new athletic director on Friday.

Scott Knapp resigned from the position in August. Assistant Principal Russ Hesler served as interim AD during the 2011-2012 school year, with Zac Remsburg as assistant AD.

Following a full school year without someone in the position, GCSC Superintendent Dr. Lori Richmond is glad to have the position filled.

"I'm just very excited that we get to move forward, jump ahead," Richmond said.

"I'm just really excited," he said. "I'm looking forward to the challenges. My goal is to improve the department and the school from an athletic standpoint."

Richmond said the AD search began in the winter with 37 applicants. Of these, six were called for interviews. The application process also included a writing element.

She said the search committee -- which included adiministrators, principals and teacher, but no school board members -- looked for athletic experience, but also valued a background in business management. An understanding of capital projects and fundraising was key.

Lewis has worked in the financial services industry for 12 years. In his spare time, he has coached youth basketball, football, baseball and wrestling. He has also helped manage youth basketball and football organizations.

"I felt I had enough experience in knowing how to coach -- coaching is coaching," Lewis said. "The bigger thing was running the leagues and knowing the fundraising."

In his background, Lewis has had a hand in raising funds for the Greencastle Middle School press box, the Fallis Field gateway at Harbison Stadium and for founding the wrestling club.

"We're headed toward pay-to-play in high school sports," Lewis said, "and I think that's going to become a bigger obstacle."

An obstacle for the board during the athletic director search came in having Lewis apply for the job while retaining his position on the school board.

Lewis announced his resignation from the board on May 9, and it did not become official until Friday.

The board went to great lengths to keep the potentially sticky situation at bay. Board president Bruce Stinebrickner explained a bit about their efforts following the approval of Lewis as AD.

"First, this appointment may seem to be an unusual one and it is not something that we undertook without considerable thought and discussion beginning several months ago," Stinebrickner said.

"Second, we realize that an outside observer might well have questions or concerns about the action that we just took."

The first complicating factor facing the board at the beginning of the search was the resignation of Monica Fennell from the board. While it may have been a good idea for Lewis to step down upon applying for the position, it was not in the face of an already reduced number on the board.

Secondly, the board was concluding an extensive audit with the State Board of Accounts in late winter, and losing Lewis' financial background at that time was not ideal.

On the other hand, the inherent potential for a conflict of interest related to hiring Lewis was also on the board's mind.

"Reconciling these considerations was challenging, and we understand that reasonable observers might disagree with how we proceeded and the judgments we made," Stinebrickner said. "It was the board's responsibility to proceed in a way that we thought was in the overall best interests of the school corporation, and we did our best to do just that."

As such, Lewis was excluded from all board discussions regarding the open AD position.

"The board asked Superintendent Richmond to neither favor nor disfavor Kelly Lewis because of his board membership," Stinebrickner said. "She was directed to recommend for appointment the best candidate, according to her professional judgment and on the basis of the extensive search that she oversaw for several months."

Trusting the judgment of the search committee, the board accepted the recommendation.

"We congratulate Kelly Lewis on his appointment and we look forward to putting his considerable talents to work in his new job as director of athletics for the Greencastle Community School Corporation," Stinebrickner concluded.

Present with Lewis for the job announcement were his wife Crystal and his three sons, Carter, Cadeo and Braxton.