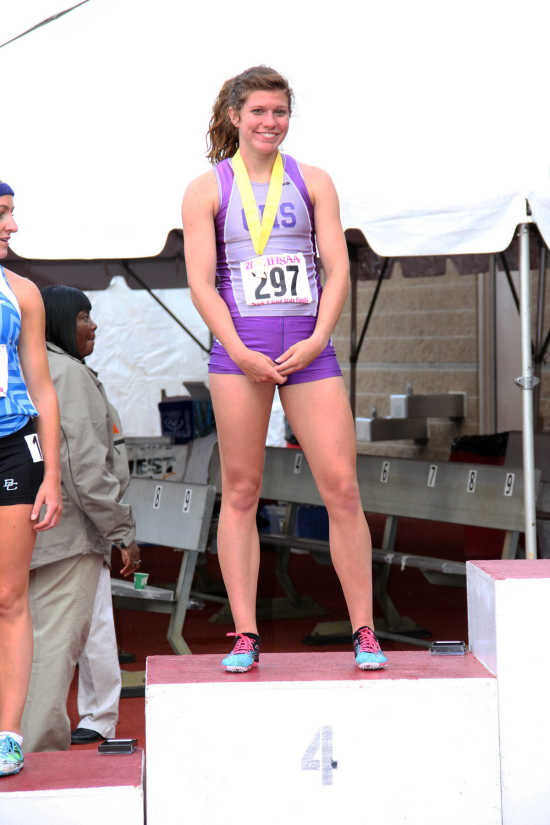 BLOOMINGTON -- Greencastle junior Colleen Weatherford had the chance to do some special things Friday at the IHSAA State Track Final in Bloomington and didn't disappoint. Weatherford placed fourth in both the 800- and 1,600-meter runs, breaking her own school record in the latter.

Weatherford's night started in the 1,600-meter run. As the gun sounded, the junior fought her way to the front and stayed with the lead pack of girls for the entirety of the race. As the ground cross the finish line, Weatherford's time of 4:57.74 gave her fourth place and broke the school record in the process.

"It's a great feeling," Weatherford said of the record. "Each time you break it, it's just another thing to strive for the next race you do."

After a rest of about an hour, Weatherford took to the track once again to compete in the 800-meter run. She was one of four athletes to run in both events on the night.

In the 800, Weatherford and Evansville Central's Taylor Wiley raced out to lead the pack. Weatherford was sitting solidly in second place, but the effects of running in both events began to show late as Fort Wayne Northrop's Emma Mirwaldt and Eastern Greene's Brittany Neeley moved in front to take second and third place, respectively.

Weatherford came across the line in fourth place with a time of 2:15.36. She said running in both events at the state level was a different experience, but one that had its rewards.

"I realize not many girls would have attempted that, so that's a great feeling there," Weatherford said. "Then just wondering if I hadn't done both, if I could have done better in one of the event. If I had done that (just one event), I still would have wondered how I could have done in both, so I don't regret it."

Weatherford thought she raced well in the 800-meter run, but said if she had known exactly where Mirwaldt and Neeley were on the track, she might have been able to time her kick better and beat them down the stretch.

With two top five finishes under her belt this year, the junior said her sights were on returning next season and doing even better.

"Just advancing on the podium again," she said. "I'm going to try hard this summer, then hit the weights next year and see where that gets me."

Her head coach, Garry Anderson, was more than pleased with his runner's results on the night.

"Come in here and get those two finishes like that -- one of them being a school record. I don't know how many athletes can in here today and got two medals. There aren't too many," he said.

Anderson admitted there was a moment of hesitation about Weatherford competing in both events. But he let his runner make the decision and when she got the message 'Go for it' from her parents, there was no looking back.

"Now she's glad she did it because now she knows," Anderson said. "I thought her mile as a good race. I enjoyed that one immensely. I believe she was a little bit tired on the 800. Of course she was running against a pretty tough caliber girl.

"She's had a great year and she's done a lot of things she's wanted to do. She's accomplished quite a bit," he added.

So far this season, Weatherford has been part of the 3,200-meter relay team that broke the school record and set new marks in both the 800-meter and the 1,600-meter run.

Weatherford has steadily moved up the podium standings since making state her freshman year and this year was no exception. Anderson said she's been working hard, hitting the weights and is looking for a return trip to Bloomington come next June.

"I wouldn't count her out next year for anything," Anderson said.