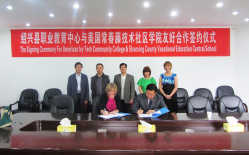 Ivy Tech Community College Wabash Valley signed an important agreement recently that will tie the school with one of the largest economies on Earth: China.

Zhejiang Shaoxing County Vocational Education Center in the Province of Zhejiang in China and Ivy Tech-Wabash Valley are now sister schools, allowing the schools to trade students and staff so each can learn about the other's educational process, culture and economy. Shaoxing is a city about three hours' driving time from Shanghai.

The agreement helps fulfill one of the key aspects of Ivy Tech's mission: To prepare students to compete globally in the workforce.

"It's simply not enough to be well-prepared for jobs in Indiana," Ivy Tech Chancellor Ann Valentine said. "Students must understand how their job fits into the larger context of the U.S. and the world, and that they are ready for the advances that come often in the business world. We want to prepare them for today's jobs, and also for tomorrow's jobs and beyond."

The two schools signed an agreement on April 12, 2012 when Ivy Tech's Lea Anne Crooks and Rene Hankins traveled to China to meet with officials from the Vocational Education Center.

Ivy Tech-Wabash Valley presented the Chinese group with the greetings from Greencastle Mayor Sue Murray. Greencastle is exploring a formal relationship with Shaoxing County as result of a visit Bill Dory, executive director of the Greencastle/Putnam County Development Center, and Mayor Murray made to China /Shaoxing County in September as part of Indiana Lt. Gov. Becky Skillman's Trade Mission.

The visit to the Vocational Education Center revealed that while the Chinese school teaches high school students, the school has many of the same vocational programs that Ivy Tech-Wabash Valley teaches. Those programs include automotive repair, welding, business and electrical.

The group had the opportunity to meet with the dean of International Education College at Shandong University during their trip. Potential exchange opportunities were discussed, and plans to communicate through email to establish an ongoing friendship between the colleges will continue. The group visited the student library, classrooms, laboratories and the administration building, a great chance for Ivy Tech to see what a full-scale university is like in China.

Also in Jinan, the group visited a boarding school that housed 3,000 students in grades 10-12. The group met with the headmaster and talked to several classrooms of students, many of whom wanted to attend college in the U.S. The 10th- grade students were focused on studying for the SAT exam. The group noted that even high school students took a nap daily after lunch and left a short time period for singing songs immediately following.

Representatives from Ivy Tech toured several key tourist destinations, including the Great Wall of China, Tiananmen Square and West Lake, which is where Richard Nixon stayed during his historic 1971 trip to China. The team also visited Shanghai, China's largest city and had the opportunity to take a night boat tour in the city.

A visit to a bookstore acquainted the group with materials for students, which included workbooks available to parents as extra study guides to help prepare their children for each grade level's standardized test.

"We know that this relationship will benefit our Wabash Valley campus and its students and faculty greatly," Chancellor Valentine said. "We believe this arrangement will be of great assistance for the entire Ivy Tech system. We're proud to showcase our educational programs here in Indiana and happy to learn from our counterparts in China."

Ivy Tech Community College -- Greencastle is located at 915 S. Zinc Mill Rd. Fall classes begin on Aug. 20. Anyone wanting more information about classes and community programs at the Greencastle location may phone 800-750-3007 or stop by the campus.