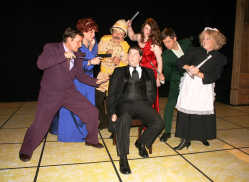 Surrounded by potential suspects and their weapons of choice, Mr. Boddy (Dustin Bond) awaits his fate in a scene from "Clue: The Musical." The play opens Thursday night at Putnam County Playhouse with subsequent 8 p.m. performances Friday and Saturday, as well as June 13-16. Portraying the familiar suspects from the Parker Brothers board game are (from left) TJ Tincher as Prof. Plum, Shelly McFadden as Mrs. Peacock, Dan Stockton as Col. Mustard, Meghan Armitage as Miss Scarlett, Pshemo Grajewski as Mr. Green and Jodi Green Wingler as Mrs. White.
Order this photo

Putnam County Playhouse begins its 51st season with a production of the mystery-comedy "Clue: The Musical."

Corporate sponsor for the musical is the Duke Energy Foundation.

The cast includes the familiar Clue game suspects brought to life as characters in a murder mystery.

Just as the Parker Brothers board game is played, the audience each night will pick the who, what and where of the crime, and will play along with pencils and paper as clues are revealed in song throughout the evening.

Each performance will be different, depending on the cards chosen secretly by audience members.

Featured in the cast are Dustin Bond as Mr. Boddy, the victim and owner of the home, and Caroline Good as the detective called in to help solve the case.

Ric McFadden is the stage and musical director of "Clue: The Musical." Pianist and pit conductor is Marilyn Burdsall. Also playing the pit are Lynne Tweedie and Michael McClaine.

Costumes are by Sarah Bond. Production stage manager is Jessica Masner. Special stage painting is by Linda Gjesvold, while Jim and Melissa Green are working on the technical aspects of the show.

The rest of the 2012 Playhouse schedule includes: