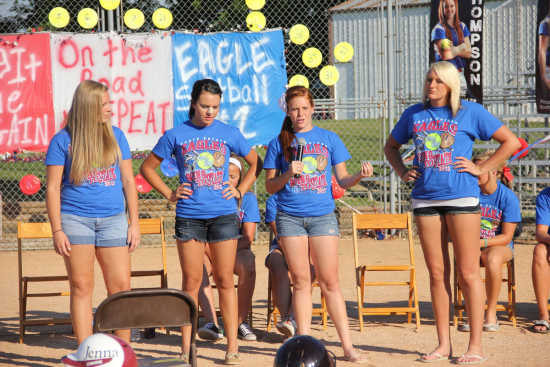 South Putnam seniors (from left) Kaylin Yon, Emily Dabkowski, Jenny Thompson and Brooke Boetjer talk about their experiences as part of the Eagles' team over the past four years.
Order this photo

It almost seemed like déjŕ vu at the South Putnam softball diamond Friday night as a crowd gathered to spur on the Eagles softball team as they go for a state championship. However, it wasn't like last year at all.

The state championship quest remained, but this team of veteran players have the chance to do something that's never been done in state history -- capturing a second state title and posting a perfect record in doing so.

After athletic director Matt Griswold welcomed the crowd, he gave the mic over to South Putnam principal Kieth Puckett who praised the team and its parent and delivered some powerful words for its senior core. He also talked about the old school values that make the Eagles such a force in the present.

"We have coach that's led our team to 55 straight wins, defending state champion and going after another one tomorrow. We have the best softball coach in the state of Indiana," Puckett said.

After the crowd stopped cheering, Puckett turned his attention to a special group of players. Seniors Emily Dabkowski, Jenny Thompson, Brooke Boetjer and Kaylin Yon were recognized and Puckett talked about each and explained what made each a unique personality and talent.

He began with Yon, pointing out that she's always ready when Jones call on her, she's positive and a leader on the bench. Puckett also noted Yon has delivered when her number has been called.

"And by the way coach, any time you've ever handed me the ball, I've won the game," Puckett said.

Next up was starting catcher Thompson. Puckett said Thompson showed girls they could have the best of both worlds. They can be the belle of the ball and be one of the best softball players around. But it was another quality Thompson possesses that caught Puckett's attention.

When talking about starting shortstop Dabkowski, Puckett acknowledged her excellence in the classroom as well as on the diamond and echoed the feeling of those in the crowd when he spoke about Dabkowski's ability on the field.

Last, but certainly not least, was starting pitcher Boetjer. The former coach said Boetjer's impact was not only felt on the diamond, but off it as well. He said she's proof that if you strive for a dream that anything is possible, no matter where you're from.

"What Brooke has done for everybody out here, for every little girls out here, Brooke has sent the message that the sky is the limit," he said. "You can be from this little bity school at the corner of these two highways, in the middle of these cornfields and you can be named the Gatorade/ESPN Player of the state of Indiana.

"And if you do it right and the softball coaches in this state has any sense, that's going to be the Miss Softball for Indiana."

Wildman imparted pearls of wisdom to the girls and pointed out that teams that make it to this point possess two things -- class and a great defense.

Wildman also pointed out to the crowd that in four years, South Putnam is undefeated on its home field. Wildman finished up his time by starting a cheer and doing his infamous cartwheel.

Addressing the crowd next was Jones who quickly thanked Eddie Jones and Jinsie Bingham and their efforts of providing meals for the team. He said the time helps the team bond. He thanked trainer Valerie Rayce for keeping the team in playing shape in a season that saw its fair share of injuries.

When Jones turned his attention to his family, the coach became emotional while thanking them. He then took turns talking about each class within the team ultimately reaching his seniors. Each took their turn to address the crowd.

"We've been through a lot and people have tried to bring us down and to say negative things about us," Thompson said. "Maybe most teams, they would separate, but with us it just brings us closer and we just get through it together and not let it bother us."

Dabkowski has had a

gling though a major injury during basketball season, the senior shortstop suffered a broken nose in the sectional semi-final and had to miss the championship game. She spoke to her team and let them know how much their support meant to her this year.

Once the seniors finished, Jones took to the mic and continued to heap praise on his team.

"I think sometimes people underestimate these girls and what they can do. They have one more chance to prove it tomorrow. And they're going to do it because they're going to play the game they know how to play. The game they grew up playing. The game that they love and the nice part is we all get to watch it and enjoy it and be a part of it," Jones said.

He asked that fans bring the energy, spirit and enthusiasm to Ben Davis the same way they've brought it all year. He encouraged them to be loud, be crazy and have a lot of fun.

Jones asked his team to continue to bring the focus that has made them the only unbeaten team left in the state.

"Come prepared, have fun, be yourselves, do your cheers, do your games and be ready to go," Jones said.

In closing, Jones made a statement about his team that he's spoken to all season long. Some could misinterpret it as a head coach talking his team up. But for Jones, he was simply stating a fact.

"If we play our game, if we play South Putnam softball, and play the type of game that these girls can play -- there's no one in the state of Indiana that can beat these girls. Let's go up there tomorrow (Saturday) at 1:30 and beat Adams Central and let's get state championship No. 2," Jones said.