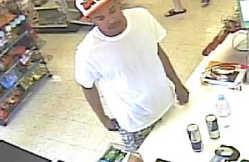 The suspect in this surveillance photo is the man Indiana State Police at Putnamville are seeking in connection with a credit card theft case at Casey's General Store in Cloverdale.

CLOVERDALE -- The Criminal Investigation Division of the Indiana State Police Post at Putnamville is soliciting assistance from the public in identifying a man wanted for questioning in a credit card theft investigation.

The investigation began on Sunday, June 10 when ISP detectives were contacted by the victim, a resident of the state of Kentucky.

An unknown male used the card to purchase fuel and other items totaling $100, authorities said.

A black male, the suspect is described as having a thin build and being around six feet tall.

Anyone who believes they recognize the suspect in the surveillance photo is urged to call State Police Det. Brian Maudlin at the Putnamville Post, 653-4114.