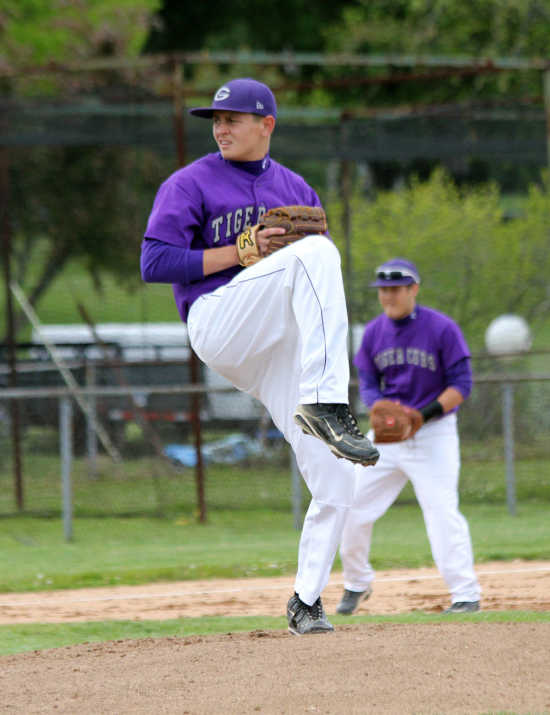 Greencastle's Ryan Battin was named the 2012 Banner Graphic Player of the Year. Battin batted .440 to lead GHS and had a pitching record of 6-2 with an ERA of 2.83.

Another season is in the books and the summer heat is upon us, but looking back some of the hottest moments this spring came on the baseball diamond. Area schools enjoyed success, with Cloverdale making a trip to the sectional final.

After looking at the numbers and putting it through our high tech computing system, we are proud to announce the 2012 All-Putnam County baseball team. North Putnam leads all schools with four players selected, but Greencastle landed the coveted Player of the Year honors.

GHS senior Ryan Battin has earned the Banner Graphic Player of the Year honor after leading his squad both at the plate and on the mound. At the plate, Battin posted a batting average of .440, with two doubles, five triples and three home runs. He was third on the team with 14 RBIs in the lead-off slot.

Battin led the Tiger Cubs in hits with 37 and in stolen bases with nine. He also posted a 6-2 record on the mound, leading the county with 59 strikeouts with an ERA of 2.83.

GHS senior Andy Bell was a steady contributor across the board offensively. Bell batted .333 with three home runs, one triple and a team-high seven doubles. He was third on the team with 23 hits and led the Tiger Cubs with 22 RBIs. He added a stolen base.

Pettit was third on the GHS squad with 12 RBIs, while posting a batting average of .342. He had three doubles, four triples and logged 25 hits. The senior was third on the team with five stolen bases.

North Putnam junior Kyler Badten led the team with a .348 batting average and in runs scored with 27. He added three doubles, one triple and five RBIs. He also earned a team-high 22 walks and lead the team in stolen bases with eight.

Badten was also one of the Cougars' top pitchers. The junior led the team with 53 strikeouts, while posting a record of 4-4. He also had two saves on the season.

Haste was another double threat for North Putnam this season. The junior had a .309 batting average and lead the team with three home runs. He added four doubles and 10 RBIs for the Cougars.

While Flynn's offensive numbers are impressive, his pitching stats were even more so. The sophomore was lethal on the mound for the Cougars this season. He led the team with a 5-1 record and an ultra-low ERA of .38. He recorded 30 strikeouts and allowed only four runs in 37 innings pitched.

On the offensive side of things, Flynn tied for the lead on the team with five doubles and had a batting average of .318. He added two triples and two home runs as well. He was second on the team with 17 RBIs and had three stolen bases.

Belcher led North Putnam with 23 RBIs, contributing one home run and two doubles along the way. He batted .333 and recorded just seven strikeouts on 60 at-bats. He chipped in 19 runs scored for the Cougars.

Junior Mannan was a force at the plate for the Clovers this season. In addition to his team-high .440 batting average, Mannan was second in home runs with six and led the county with a whopping 46 RBIs. He also led the team in hits with 40, adding four doubles and one triple.

The speedy senior led the team with nine doubles and was tied for the team lead with eight stolen bases. Brinkman added three home runs and one triple. The senior led the Clover with 35 runs scored.

Gibson led the Eagles with a .458 batting average with two home runs and four doubles. He also led the team in runs scored with 26 and in hits with 33. The senior contributed 12 RBIs and led the county with 26 stolen bases.

Parker was second on the South Putnam squad with 31 hits and in batting average with .456. He led the team with 19 RBIs. He recorded two home runs, one triple and a team-high seven doubles and had 10 run scored.

The junior led his team with 48 strikeouts in 32 innings pitched.

The 2012 All-County team class breakdown is six seniors, four juniors and two sophomores. The Banner Graphic would like to congratulate all members of the 2012 team and the Banner Graphic Player of the Year Ryan Battin of Greencastle.