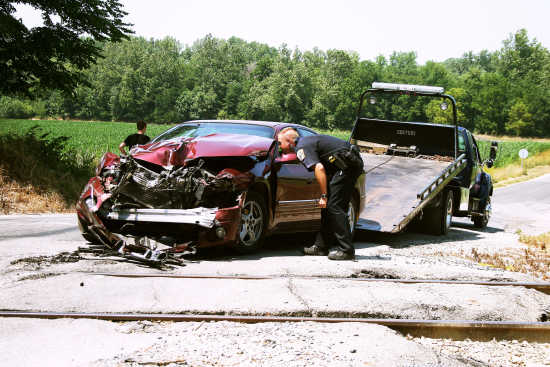 Just before 2 p.m. on the hottest day of the year, a Pontiac Bonneville, occupied by two Bainbridge brothers in their 20s, and a Ford Explorer, occupied by a Coatesville woman and her adult son, reportedly engaged in a traffic confrontation at Fillmore Road and State Road 240.

The driver of the Ford Explorer apparently made a maneuver at the intersection that angered the occupants of the Pontiac, police reported.

Police were not releasing any names Thursday evening, pending further investigation and the forwarding of the case to the Putnam County Prosecutor for possible charges.

With the Pontiac following the Ford west on Indianapolis Road from State Road 240, the situation "escalated all the way up to 10th Street," Sgt. Jones said.

Stopped at the traffic signal there, Jones added, "they decided to jump out and confront each other."

The confrontation was entirely verbal, although interlaced with profanity, the officer said.

"There was an accusation of a weapon," Sgt. Jones said, explaining that the mother and son claim the Bainbridge brothers threatened them with a handgun, although there has been no confirmation of that and no weapon was recovered in the investigation.

Police did confirm that the male suspects involved in the alleged road rage incident were the same ones who crashed their car into a CSX train a short time later after reportedly leaving the scene of the confrontation at a high rate of speed.

The apparent victims then left the altercation scene, Sgt. Jones said, and continued toward downtown Greencastle. The officer was subsequently able to pull over their vehicle and get their side of the story.

The Bainbridge men continued north on Round Barn Road (County Road 100 East) until their Bonneville struck the middle of the short, three-car westbound CSX train.

"Damage to the train was minimal," GPD Officer Ed Wilson said at the scene, 1.25 miles north of the intersection with Albin Pond Road. "It only bent the metal steps (on the side of the train car) they use to get in and out."

The train stopped about 200 yards west of the intersection, while pieces of the Pontiac's front end were strewn to the west along the railroad tracks.

Skid marks at the scene were measured at 125.6 feet, indicating the Pontiac had been traveling at a high rate of speed, Wilson noted.

Fortunately, neither man had any serious injuries as a result of the car-train collision. They did have burn marks from the airbag deployment, Sgt. Jones noted, but nothing that required medical treatment.

The Bainbridge brothers were interviewed at GPD headquarters while at the scene, Chris Kashman of Priced Rite Towing, Groveland, hooked up the Pontiac and towed it away.

Sgt. Jones said he will make a report and give it to the Prosecutor's Office for review and a decision on whether any charges "from the incident in the roadway" will be forthcoming.

"People just need to keep their cool," Jones stressed on a day that temperatures topped 100 degrees across the area.

"I don't know if it was heat-related or what," the GPD sergeant added, "but this basically started over a minor traffic offense ... it's hot, and something happens and people lose their temper, and before you know it, there's a problem."