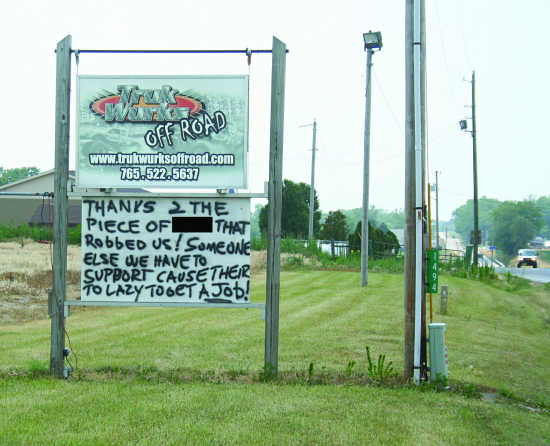 After being robbed on Sunday night, Truk Wurks Off Road owner Greg Adams painted a strong message to the residents that drive past his store on U.S. 36. The sign reads, "Thanks to the piece of (expletive) that robbed us! Someone else we have to support 'cause they're too lazy to get a job!"

BAINBRIDGE -- Frustrated by a recent robbery of more than $11,000 worth of parts and materials, Truk Wurks Off Road owner Greg Adams took things into his own hands.

Adams reported the robbery to the Sheriff's Department on Monday morning but, still in a rage Tuesday night, he spray painted a manifesto on the sign for his shop on U.S. 36, just east of U.S. 231.

"People need to speak out," Adams said. "It's frustrating. It's not just here that it's happening."

As the sign suggests, it is believed that the thieves stole the materials to resell the metal for scrap.

Adams said he has alerted every scrap metal shop within 100 miles to be on the lookout for some of the very unique parts that were taken, and he is optimistic they will be caught.

He has not heard any complaints about the language in the sign, and doesn't expect to.

More than one ton of material was taken, which suggests multiple people were involved, working fairly hard in the theft.