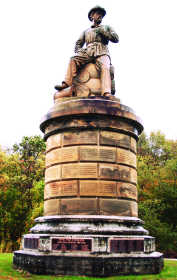 Dedicated July 2,1870, the historic Civil War Soldiers Monument in Greencastle's Forest Hill Cemetery stands more than 29 feet tall. While the names of 321 Putnam County soldiers who died during the fighting are etched into the limestone, several are now crumbling away.

While fully restoring the historic Civil War Soldiers statue at Greencastle's Forest Hill Cemetery may seem like a monumental task, at least one small step has been undertaken.

A number of vertical cracks in the limestone pedestal and base of the 142-year-old monument have been filled in with silicone recently to try to keep deterioration at a minimum.

"Most of the damage has been done from water running down the monument, widening the cracks even more," Forest Hill Cemetery Superintendent Ernie Phillips told the City Council earlier this week.

Putting silicone into those gaping areas will "hopefully solidify things for now" and prevent deterioration from escalating, Phillips said.

An appraisal of the unique monument conducted this spring for the Heritage Preservation Society (HPS) indicated that more permanent repairs would be costly.

HPS officials have expressed their desire to be part of the solution by raising awareness that the monument "needs attention."

Halting the damage -- which includes crumbling pieces of the limestone with names etched into it coming off the sides of the monument -- is seen as costing approximately $12,500 to prevent further decay.

And for additional $50,000, the HPS has been told, the Forest Hill monument can be "restored to its original glory."

All of that however is purely conjecture at this point as funding the repair work remains the issue.

"We're on hold as far as doing anything else until we figure out our next step," Phillips said.

The 29-foot-tall monument -- which bears names of 321 Putnam County soldiers who died in the Civil War -- has stood tall at Forest Hill since the day it was dedicated.

That occurred on July 2,1870 before an incredible number of visitors. A reported 8,000 people attended the dedication, while fewer than half that many people (3,300) actually lived in Greencastle at the time.

The Civil War Round Table of West Central Indiana calls the monument "one of the true hidden treasures around here."

The Forest Hill monument was just the third such memorial to Civil War soldiers to be erected in Indiana after the War Between the States ended. To this day, it remains one of the more unique, experts agree.

The monument is considered the earliest example of a military figure appearing on a Civil War memorial in Indiana.

"There is no other figure like him in the state," the website Sculptural Civil War Monuments in Indiana states, referring to the noble figure as "the unusually seated cavalry soldier."

The soldier atop the monument is considered a "faithful portrayal of a Civil War volunteer," according to 1870 dedication ceremony documents.

Originally the soldier held a rifle, but it was reportedly stolen as a fraternity prank. Eventually recovered, the rifle was never reinstalled for fear of repeated thefts and/or vandalism.

However, when a nearby home used as the cemetery office was consumed by fire in 1979, the rifle was lost to all eternity.

Old postcards that feature the monument can be found showing the soldier with rifle in hand.

The bronze plaques at the base of monument are a more recent addition when it was discovered not all Civil War veterans' names had been included on the statue.