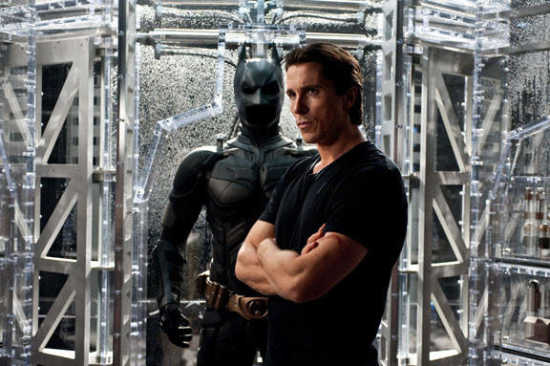 Christian Bale reprises his role at Bruce Wayne and his alter ego Batman in Chistopher Nolan's "The Dark Knight Rises."

If you came here looking for spoilers, you've come to the wrong place. I might give a few little things away, but nothing of substance. Like I'll never tell that Batman/Bruce Wayne actually turns out to be Spiderman disguised as Superman disguised as Batman.

In all seriousness, I'll get one thing out of the way -- "The Dark Knight Rises" is an almost three-hour epic ending to writer/director Christopher Nolan's Batman trilogy. It may have a few chinks in the Batsuit, but overall it's a fitting conclusion that is satisfying, and in true Nolan fashion, leaves your mind racing to put everything in its place.

As most fans remember, Batman/Bruce Wayne (Christian Bale) didn't finish the last film in the best shape. He lost the love of his life, Harvey Dent became a baddie and was killed and Batman took the blame for Dent's death, becoming Public Enemy No. 1.

Fast-forward eight years and Wayne is a broken man -- literally. After the "Dent Act" has cleaned up Gotham's streets, Wayne spends his time hobbling around Wayne Manor as the many years of abuse he's put his body though finally catches up with him.

With the crime rate next to nothing and Batman on hiatus, Gotham is living the high life. The city's inhabitants are content to kick back, live large and enjoy the spoils. However, Wayne has done the opposite. He's retreated to his mansion and loses track of the outside world while trying to deal with his feelings of loss. The result is Wayne Enterprises in shambles and Bruce is a man with nothing to live for.

"The Dark Knight Rises" reintroduces the muscle bound, mask wearing baddie -- Bane (Tom Hardy). Bane comes to Gotham with one thing in mind -- leveling the city and fulfilling Ra's al Ghul's (Liam Neeson) plan. Now Wayne's plans of laying low are out the window and he must once again don the cowl and cape to defend Gotham against it's newest foe.

Wayne also has to contend with Selina Kyle (Anne Hathaway), a sexy, slinky catburglar who's actions unwittingly help set Bane's plan into motion and spin the city into chaos.

Lucius Fox (Morgan Freeman) is back to help Bruce rebuild Wayne Enterprises, which includes a partnership with Miranda Tate (Marion Cotillard), a beautiful businesswoman intent on working with the company to create a clean energy source.

The newest and possibly most intriguing character is tenacious police officer John Blake (Joseph Gordon Levitt). Blake's life has eerie similarities to Bruce Wayne. He's an orphan and has learned to mask his anger behind the mask -- metaphorically speaking in his case. He also knows something that most of Gotham doesn't know -- Bruce Wayne is Batman.

The relationship between Bruce and his beloved Alfred (Michael Caine) is strained to say the least. Alfred has spent his life waiting for Bruce to live up to his potential and the time for waiting is through. The scenes with the duo are stunningly powerful. They drive home once again that this isn't your typical comic book movie.

The greatest thing about "The Dark Knight Rises" is Batman seems to hardly be on screen for most of the movie. Instead of rolling Batman out and allowing him to kick some butt for three hours, Nolan opts to go for a character-driven story and it pays off big time. It's easy to lose track that your actually watching a superhero movie and not a full-fledged drama.

There will be people asking if the latest film is better than "The Dark Knight" and the simple answer is, no it's not. What this film has in story and character arc, it lacks in a significant bad guy. I thought Hardy did a great job as Bane and if you have heard you can't understand the actor behind the mask, that's completely not the case. It's tough at times, but I never missed a word.

Any villain Nolan tossed on screen would pale in comparison to the late Heath Ledger's Joker. That performance not only lifted Nolan's "Dark Knight" trilogy to new heights, it also left it nowhere to go in terms of a bad guy. I wish they had gone with a traditional villain such as The Riddler or The Penguin or even a new age villain such as Harley Quinn. But the truth is, anything Nolan went with couldn't compare to the menacing presence of Ledger's Joker.

That being said, "The Dark Knight Rises" is one heck of a film. It's an adrenaline rush of action that moves at a constant pace to an unavoidable end. Posters of the film read "The Legend Ends" and they are right.

Nolan teamed up with his brother Jonathan to produce a screenplay that is as epic as one would hope. It doesn't settle for giving us what we expected and wanted, it gives us what we needed -- a film that shows that no one is invincible, but we call can overcome the darkness of the past that surrounds us.

Bale, Freeman and Gary Oldman are up to their old tricks again, delivering wonderful performances. Hathaway is perfect as Catwoman. As a boy who grew up watching the character played by Julie Newmar (in reruns of course) and then a teen watching Michelle Pfeiffer playing Catwoman, I was ready for the character's return and Hathaway didn't disappoint.

Caine proves to be a scene-stealer in the latest incarnation of the Batman franchise. His powerful performance as Alfred in "The Dark Knight Rises" gives an emotional punch that most films in the genre lack. It was nice to see the actor show his range.

Hardy's version of Bane is a far cry from ridiculous incarnation that graced the silver screen in 1997's "Batman & Robin." Hardy's Bane is pure badness, clad in leather, without a trace of neon or blacklight paint. The actor gives a good performance despite the face you only see his eyes because of his mask.

Nolan and Bale have said this will be their final go in the Batman franchise and if that's the case, they go out with a bang -- literally.

Final Cut: In a summer filled with comic book franchise flicks, "The Dark Knight Rises" is a worthy addition. The film is a fast-paced epic ending to Nolan Batman franchise with an ending that is the most satisfying of the summer.