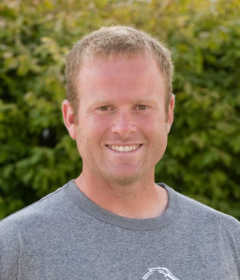 Hiemenz took over the post Aug. 1 after spending five years as an assistant coach at Boise State University. He also spent five years as head coach at Carroll College in Montana.

"While coaching at Carroll College in Montana, Mark proved he can take a fledgling team to the NAIA national tournament," notes Jerry Schmutte, athletic director at Hastings College. "Given that track record and the additional experience he gained at Boise State, an NCAA Division I school, I'm really excited to see what he will do with an established program such as ours.

Hiemenz's move to Nebraska lands him at a nationally recognized program but equally as important, it brings his family closer to his wife Katie's family.

"I am truly excited and humbled in accepting the head coaching position at Hastings College and look forward to working with both the returning and first-year group of student-athletes," said Hiemenz. "Furthermore, I am forever grateful for the wonderful people at Boise State like Coach Steve Lucas and Senior Associate Athletic Director Curt Apsey who provided me the environment to grow both as a coach and person.

"While I'm departing one tremendous Bronco family, I believe I'm joining another one at Hastings College. After my conversations with Jerry Schmutte and (HC Bronco Men's Soccer head coach) Chris Kranjc, I knew that bringing my wife and daughter closer to our family was the right decision. With exceptional facilities and academic reputation, I firmly believe Hastings has the potential to achieve great success regionally and nationally."

Hiemenz graduated from DePauw in 1997 with a bachelor's degree in communications and a minor in English literature.