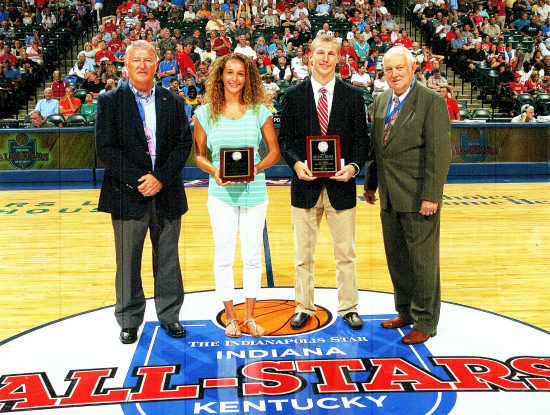 The awards honor Aikman for his 20 years as director the Indianapolis Star All-Star Games and his recent service to the IBCA as special project coordinator.

Aikman is the second Greencastle resident honored by the IBCA Scholarship Program, which has funded students awards totaling more than $515,000 since the inception of the program. He joins only Marion Crawley in that honor.

Thirty senior basketball players, five student managers and one cheerleader shared this year's Marion Crawley Scholarships that have recognized basketball and academic achievements, extracurricular activities and contributions to the winners' school and communities.

The late Mr. Crawley was a native of Greencastle, an iconic coach who led the Washington Hatchets and Lafayette Jefferson Bronchos to four state championships -- two at each school. He amassed 644 wins on the court and was the first executive director of the IBCA, the world's largest basketball coaches association with 2,600 members.

Both Aikman and Crawley are DePauw University graduates.

The Aikman Awards are based on academic achievement, noteworthy success in basketball, extracurricular activities and service to the winners' school and community. Winners must be planning to enter journalism, sports management, athletic training or physical therapy career paths.

Seniors Ashley Klass of Evansville North and Josh Gill of Goshen High School were unable to attend the announcements, which brought to 42 the total number of all named awards announced at the 2012 Indianapolis games.

Witty, like Aikman, a member of the Indiana Basketball Hall of Fame in New Castle, will continue to organize and present the 72-year-old interstate rivalry that has raised nearly $3 million for Central Indiana not-for-profits since it became a charity event for The Star in 1946.