You don't have to be a little girl to love dolls, visit PCPL 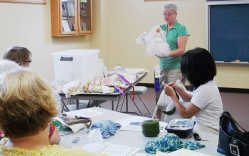 Sue Ryland describes her doll collection for members of the Common Threads Extension Homemakers Club during a program in the Kiwanis Room at the Putnam County Public Library.

Sue Ryland taught herself how to crochet approximately 13 years ago while she was still working fulltime at the Putnam County Hospital. The first thing she made was a wedding dress to fit a Barbie Doll.

Ryland was amazed when her first effort got a first place and champion ribbon when she entered it in the Crochet Department at the Putnam County Fair.

She has since retired and continued to crochet Barbie Doll dresses (mostly wedding dresses) from cotton thread and has entered one every year. Ryland enjoys making wedding dresses due to the challenge of the intricate patterns, often including multiple layers.

Two of her creations that aren't wedding dresses include the red, white and blue outfit that she made after 9/11 and the gold flapper gown with more than 5,900 beads individually crocheted into it. Her entire collection of dolls with hand-crocheted outfits is currently on display on the main level of the Putnam County Public Library.

Ryland recently showed and described her collection of dolls to other members of the Common Threads Extension Homemakers Club.

Common Threads is the newest Extension Homemaker Club in the county and meets on the first Saturday of each month in the Kiwanis Room at the Putnam County Library. Members of Common Threads Club enjoy coming together to learn about, work on and share information about crocheting and knitting as well as any other craft that involves working with yarn or thread. 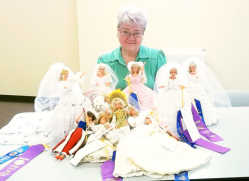 Sue Ryland poses with her doll collection, several of which have won ribbons in the Crochet Department at the Putnam County Fair.

Members of Common Threads Club agreed to make hats for the September Baby Shower, as they will go to babies born in the fall and winter when it will be chilly in the prison.

Anyone who would like to join the Common Threads Club or would like more information about the group can contact Shelly Tahtinen at the Extension Office or call 653-8411.