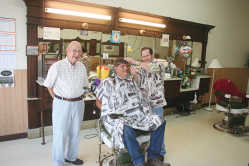 Pete Noland (above, left) retired on July 28 after working as a barber in Roachdale since 1946. The shop is being turned over to Bud Thomas, seen here giving a trim and shave to local man Jim Bryant.

ROACHDALE -- Pilgrims sailed to the new world and founded a colony in Plymouth, Mass., 16 generations ago.

Pete Noland, the former owner of Noland's Barbershop in Roachdale, retired last week and had a startling revelation.

"There's families that I've cut five generations of their hair," he said.

Noland, with 66 years of experience, hung up his shears a couple weeks ago. His last paying customer, on Saturday, July 28, was Donald McGaughey.

There was a time, several decades ago, that Roachdale, Ind., population 926, a town that occupies all of .51 square miles, was home to four barber shops.

"When I first started we used to be open until 12 o'clock on lots of Saturday nights," Noland said. "I saw my dad work until 2 o'clock."

This was at the tail end of the Great Depression. The barbershop was the place to rest after a long week, share stories and gossip with the other farmers -- Indiana University basketball has always been a hot topic -- and wait in line for a cut.

For another two bits, he could get a shave. 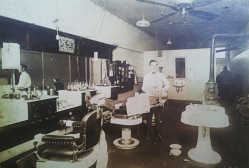 Pete Noland, Sr. had this picture taken after he purchased the shop in 1925. Although the store moved across the street to its current location in 1930, the interior is nearly identical today.

The junior Noland worked there through high school.

A shoe shiner those days shined shoes, but he also polished the brass, swept up hair and cleaned the bathtub and shower in the back room after each use -- patrons took baths at the barbershop back then.

Around the time Noland graduated from Roachdale High School in 1946, haircuts cost 65 cents, Americans celebrated the first anniversary of V-J day, and Pete Sr. passed away.

Noland hadn't intended to go into barbering until then, but sometimes things change.

He crossed business school off his list and went to barber school instead.

The family loaned Noland's Barbershop to Charlie Reed, then Noland returned from barber school to begin his five-year apprenticeship.

He recalls his first cut like it was his last.

"I came in to work and three or four men are waiting, and they're sitting back on me," he said. "They wouldn't let me cut their hair.

"A man (Oll Blaydes) walked by outside and saw what was going on, and said, 'By Goll, he can cut my hair!' so he sat down and I cut it and the rest followed suit."

Noland gained experience over the next few years. The plan was for Reed to turn the shop back over to the family after the apprenticeship ended.

Then in June, 1950, North Korean troops stormed across the 38th parallel.

Noland enlisted, doing medical and administrative work for the U.S. Air Force and barbering on the side.

When he left for the Korean War, haircuts were 75 cents.

He heard the price went up while he was gone.

When he returned in 1954, Noland took over the shop and business boomed. Nearly every customer stopped by two or three times a month.

Things went on that way for nearly a decade.

Money was coming in and, in 1959, Noland tied the knot with his wife of 53 years, Toadie. They raised two daughters together, Gail Powell and Sarah Schubert, and now have six grandchildren.

Then, in February 1964, the only significant change to barbering that Noland can recall happened, and it happened seemingly overnight.

The days of bi-weekly crew cuts, buzz cuts and flat tops were over. People began growing their hair longer and getting it cut less often.

"When The Beatles came to town," Noland said, "a lot of people started going to stylists."

Noland tried to adapt, signing up for a stylist class in the late 1960s, but he decided it wouldn't be worth the time.

Barbering was his craft, his medium, and he stayed the course.

He got hair down to his knees

Bryant, a Roachdale resident, said this while sitting in the 100-year-old barber's chair at what is now called Roachdale Razor and Kutz.

It was only the second time in the past three decades that someone besides Noland had trimmed his locks.

Last month Noland sold his shop, still filled with all the equipment that had been purchased in 1912, to Greencastle native Bud Thomas.

"It ain't gonna be the same without old Pete in here," Bryant said. "Pete is one of a kind. He's been good to me. And fair."

The shop has been mostly unchanged since Noland took over.

There was another barber for a bit, a salon in the back for a minute, but those are long gone now.

The antique shoeshine chair he and his father used as children, along with much of his other equipment, will be donated to the Putnam County Museum.

The bath Nolan cleaned as boy now sits in an enclosed back room that was converted to an apartment several years ago.

Thomas, who now lives there, said he plans to keep everything as is.

"I sit in here sometimes when I'm alone and just look (at the history)," Thomas said. "As long as I'm above ground I want to keep right here doing this."

The two first met last month and quickly hashed out a deal, their shared passion for barbering giving them a bond.

"He (Pete) wanted someone to make sure it stayed a barbershop and it wouldn't just close up," Thomas said. "Barbering is what I am and I wouldn't trade it for anything."

Thomas brings 23 years of experience with him. He worked at Dick's Barber Shop in Greencastle and credits much of his passion to his former boss, Richard Asbell.

"I didn't think I'd ever get a barbershop. I thought I'd always be working for somebody else," he said "Dick did a good job keeping the fire in me."

Noland still has a passion for barbering, but as he nears his 84th birthday, he no longer has the body or nerve to do it full time.

Although he's had no problems, giving the first haircut to a child now puts him on edge.

"I used to cut them when they were screaming," he said. "Now I just can't do it."

He still may cut hair on occasion, as he did for his grandsons last Sunday, but no longer will it be for the customers he's served since 1946.

His last cut in the shop was for his family on Sunday, July 29.

"When they got out of the chair," he said, "they were crying and hugging me. I said, 'By gosh, you didn't cry that much the first time I cut your hair."

Noland isn't sure what he will do next, but he may stop in his old shop from time to time.

"I want to thank my customers for their patronage for the past many years," Noland said. "All the memories have been good. I've enjoyed my customers."