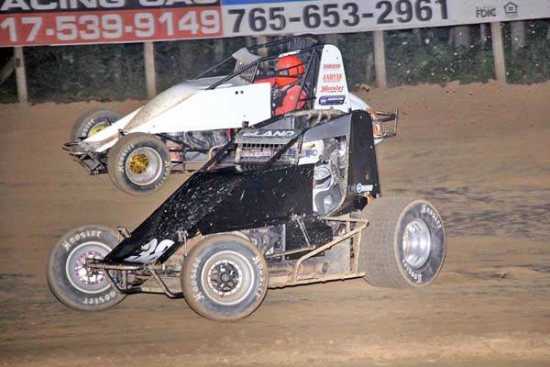 Driver Billy Puterbaugh Jr. (53) slides on the outside of Jeff Bland Jr. (38) during the Sprint Car Feature Saturday at Lincoln Park Speedway. Puterbaugh Jr. went on to win the event.

PUTNAMVILLE -- Saturday night was a special night for several race car drivers at Lincoln Park Speedway. A bit of redemption and perhaps a clean slate for those that found the winner's circle.

Billy Puterbaugh Jr. stepped out of the family sprint car with an opportunity in the famed Fox Brothers No. 53 and made the chance a golden one with a pass of Jeff Bland Jr. to take the victory in the A-main. The win provided the Fox Brothers with their 100th career feature win as car owners.

For Rob Fuqua, the 2012 UMP Modified season has been awash in tough luck, but this weekend he claimed his first win at LPS since May of 2011 in the No. 3f machine, holding off a determined group of challengers. The UMP Super Stock fight this year has been a series of near misses by Doug McCullough, but he found victory lane ahead of Steve Peeden and Kenny Carmichael Sr.

Puterbaugh, a former track champion at Lincoln Park Speedway, has been a regular at Gas City on Friday evenings, but has made just one frustrating trip to scenic Putnamville in 2012. However, it was apparent on Saturday that he was going to make his initial shot with the Fox Bros. count as he powered his way to a heat race victory to set himself up in prime position to start the show. Jeff Bland Jr. captured his own heat and set himself alongside Puterbaugh on the front row to start the A-main.

Bland was on point for the early stages of the feature as the field fought through early cautions that relegated Dakota Jackson, AJ Anderson and Conner Donellson to the back of the lineup. The No. 38 of Bland held down the lead early on as Puterbaugh sought a bottom line for the lead. Last week's winner, Josh Burton, advanced into contention ahead of Keaton Dobbs and Brett Burdette.

With Puterbaugh challenging for the lead 19 laps into the 25-lap race, Bland was caught by Puterbaugh, who had switched to the top of the track. Bland maintained his line and Puterbaugh got a big run off the top into a side-by-side battle. Burdette brought out a red flag after a roll in turn four that re-set the field with six laps remaining.

When the field went green, Puterbaugh was the leader as Bland slowed momentarily in the corner. Puterbaugh's strong re-start would pay off as he maintained his advantage over the final circuits to claim victory. Bland would hold down the second spot as Josh Burton locked down third. Tyler Courtney scored the fourth spot ahead of A.J. Anderson.

Fuqua grabbed the initial lead as Paul Bumgardner challenged early, but his battle with Bradley Sterrett led to a slip over the back stretch berm and a loss of position. Up front, Fuqua held down the point as a battle for the top-five developed amongst seven drivers.

Sterrett had second for much of the feature, but he was closely followed by a horde that included Varner, Kenny Carmichael Jr., Chris Brewer, Bumgardner and Kent Robinson.

A late yellow with four laps remaining set up a dash to the checkered flag, but Fuqua was on task to pick up his first LPS win in more than a year.

McCullough had been seeking victory for weeks and Saturday was his night to shine as he parlayed a pole starting position into a win in the UMP Super Stock feature.

Steve Peeden and Kenny Carmichael fought for top spots alongside Travis Heramb and Mike Staggs as a caution waved with eight laps in the books. Troy Clark, who had gone to the work area on the opening lap and started on the tail, was working his way through the field.

With 14 laps scored, debris on the track brought out a caution and set up the final dash as Peeden and Carmichael were door-to-door ahead of Mike Staggs with Clark a distant fifth. With the checkered flag in the air, McCullough's chase for victory lane came to fruition as he crossed the line ahead of Peeden for the victory. Kenny Carmichael Sr. placed third with Mike Staggs and Clark.

A caution filled feature saw Bryan build several strong leads as Harry Shepherd and Blake Cross fought for the second spot for much of the feature. However, a late tangle between the pair sent both to the pits and opened the door for a late team battle between Bryan's No. 8 and Burn's No. 88. David Bumgardner, who went to the tail of the lineup early on, battled his way to the front as David Wallen fought for third.

The fight for the third spot went to the wire as Curt Leonard claimed the position ahead of Wallen and Bumgardner.

Next week will feature the Midwest Sprint Car Series with $3,000 going to the winner. UMP Modifieds and super stocks along with bombers are also on the card.