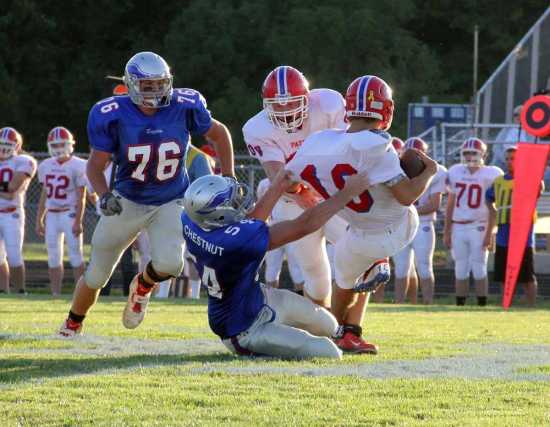 South Putnam began its defense of its 2011 sectional title with a season opener against Owen Valley Friday. If the game's outcome is any indication, the Eagles' opponents have been put on notice.

The Eagles rolled, or more accurately, ran their way to a 33-7 win over Owen Valley. Sophomore Lucas Lorian provided a major punch for the South Putnam offense, carrying the ball 23 times for 179 yards and four scores.

"Any time you can come out and beat Owen Valley, it's a great win," South Putnam head coach Troy Burgess said. "They're a good football team. They're very, very well coached. They play hard, they're physical and they're well coached.

"So for us to come out and execute and win, it's a great win for us."

Lorian put South Putnam on the board during its first possession of the game, driving the ball in from one-yard out at the 9:04 mark of the first quarter.

They added another score when quarterback Sawyer Arnold slashed his way in from the 20-yard line, ricocheting off of numerous Owen Valley defenders before crossing the goal line with 2:36 remaining in the quarter to put the Eagles up 12-0.

Midway through the first quarter, when Ranard dropped back to pass, South Putnam senior Ryan Chestnut broke through the line and sacked the quarterback -- hard. The hit sent Ranard to the bench and let everyone present know; South Putnam's defense is a force to be reckoned with.

In the second quarter, Lorian once again found the endzone -- twice to be exact. With 8:28 on the clock, the sophomore took the ball from Arnold, made a few cuts and turned on the jets to blast past the Patriots' defense and cross the goal 56-yards later.

Lorian added a one-yard touchdown just before the half to lift the Eagles to a 26-0 halftime lead.

For everything South Putnam did well in the first half, they had a few hiccups. Arnold tossed two interceptions in the first half, but Burgess said those things happen in a season-opener. He said the team would need to look to put the ball in the air more often as well.

"I thought he put some balls in the right spots tonight. We had a drop that would have been a touchdown. And then we had two more opportunities to maybe to punch it in and he made bad decisions and he knows it. It's a learning experience."

Things slowed down for the Eagles in the second half as they kept the ball on the ground to eat up the clock. As he had done three times in the first half of play, Lorian found the endzone to collect his fourth TD of the night to give South Putnam a commanding 33-0 lead with 7:28 remaining in the third quarter.

As the horn sounded signaling the fourth quarter, South Putnam pulled its varsity offense and gave some of its junior varsity and freshmen team members some valuable experience on the field.

Owen Valley was able to record its first touchdown of the night when Larry Shaffer took the ball and raced through the South Putnam defense for a 91-yard scoring scamper.

The Eagles kept the ball on the ground and ran out the clock to start 2012 with a 26-point victory.

In addition to Lorian's 179 on the ground, Arnold added 56 yards. Dakota Bunten came in during the fourth quarter and showed the Eagles have depth in the backfield as the sophomore rushed eight times for 81 yards, including three runs of 15-yards or more.

Arnold threw for 113 yards on 4-of-9 and gave up two interceptions. Codey Snow led the team in receiving yards, collecting 53 yards on one catch. Justin Bumgardner caught two balls for 47 yards.

As a team, South Putnam collected an impressive 374 yards rushing and its head coach praised the efforts of his big guys on both sides of the line.

"I was very pleased offensively. I thought our big guys up front really played well for us. We feel like that's the strength of our team and they didn't let us down tonight," Burgess said.

The Eagles' week two matchup with Tri-West will be something special. South Putnam travels to Lucas Oil Stadium next Saturday and Burgess noted the week leading up to the game will be an exciting one.

"It's going to be exciting. It's something, unless you make it to the state championship, a lot of kids don't get the opportunity to play there," Burgess said. "So we're very excited about it. We don't have a lot of time to celebrate this one."

Burgess stated that when he began coaching in this area 26 years ago, that he looked at Tri-West as the type of program he would like to emulate. He noted the Bruins are traditionally a well-coached team that plays hard and they are a first-class program in every sense of the word.

The Eagles will tangle with the Bruins Saturday at Lucas Oil Stadium at noon.