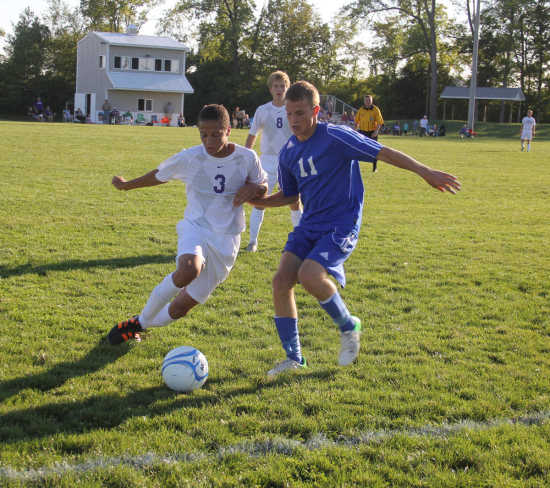 After seeing its fair share of scoring last year, it might come in short supply for the Greencastle boys' soccer team in the 2012 season. Through four games this season, Greencastle has mustered only one goal in regulation.

"Four games and only one goal says a lot," GHS head coach Dave Lilly said. "We've worked a lot of finishing, it's just the chances we've had we've squandered. We had some good ones. I think we had the better of them tonight except for defending that last free kick."

The Tiger Cubs tough time continued Tuesday in its contest against Crawfordsville. The squad fell 1-0 with the deciding goal coming in the closing seconds.

Greencastle had few chances to strike in the first half, but each opportunity it had, the shot was either high, wide or was deflected by a Crawfordsville defender.

In the second half, things started to turn around for the Tiger Cubs. They were able to gain separation more often and get better shots on goal. But as in the first half, their shot opportunities weren't able to find the back of the net.

With time ticking away, it looked like the teams would go to penalty kicks to decide the match. But as the clock went under 10 seconds a call was made that ended up deciding the match.

Greencastle's Sam Sloan was signaled for a yellow card with nine seconds remaining after the referee said he delayed Crawfordsville's restart.

An Athenian player set the ball and kicked it into Sloan as he was walking back toward the goal. Lilly thought his player didn't do anything wrong, but the referee said it another way and made the call.

On the ensuing free kick, the ball made its way into the goal area where both teams battled for it. Crawfordsville's Jordan Miller was able to gain control of the ball and drilled it past Greencastle keeper Zane Miller to deliver the Athenian the win.

"I didn't think it was the right call, but we still should have done a better job of defending the free kick. We defended pretty well all night and Zane (Miller) did a good job. Why did we let the ball end up in there with nine seconds to go is beyond me," Lilly said.

Lilly said his team is going to need to find its go to scorer to be able to get the points on the board needed to pick up wins during the season.

"I guess it's back to work on trying to figure out who that guys is that's going to be the one that can put the ball in the back of the net," Lilly said. "It's not easy in this game. We've made it look easy the last few years with the guys we've had scoring so much.

"With that whole group gone, we have a returning defensive group and our keeper play is better than it was last year. I'm expecting we'll see a lot of low scoring games. That's going to be a switch for us, but I'd like to at least get over the hump," he added.