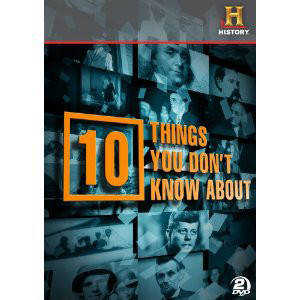 Did you know John F. Kennedy took steroids? Did you know Franklin D. Roosevelt used cocaine for sinus issues? Did you know Benjamin Franklin wasn't the one flying the kite on that famous night back in 1752. If you didn't, have I got a DVD series for you.

The History Channel's "10 Things you Don't Know About" first season was recently released on DVD and it's an interesting watch to say the least. It takes many known personalities, such as Kennedy, Roosevelt, Abraham Lincoln, J. Edgar Hoover and the Mormon Church and as the title indicates, tells us 10 things we might not have known before.

Some of the information is flattering and some isn't. For me it was interesting to see how powerful people's weaknesses were either glossed over or simply swept under the rug.

Is it intriguing? Yes. Is it historically accurate? Maybe.

I've read where some people have questioned how accurate the stories are. I can't offer any new insight to that, but the stories are not too far out of the realm of belief.

Do I believe that J. Edgar Hoover had a fear of germs and in turn was buried in a lead-lined coffin that weighed more than a 1,000 pounds? Absolutely. Did the American government declare war on the Mormon church? Doesn't seem out of the question at that time in history.

The greatest thing about the series is it makes you look at things we thought we knew in a completely different way.

The most striking stories for me were about John F. Kennedy. The fact they did everything they could, including steroid shots to make him look healthier entering his 1960 presidential election, is just one of a few facts I had no clue about. I also didn't know he was diagnosed with Leukemia in 1935 only to have the symptoms disappear.

The DVD features some bonus footage for certain segments, but nothing else. The menus are easy to navigate.

Final Cut: Even for non-history buffs, "10 Things You Don't Know About" is an interesting watch and worth checking out. The segments are short and zip by and it's easy to just keep hitting the play button to see what secrets will be revealed next.