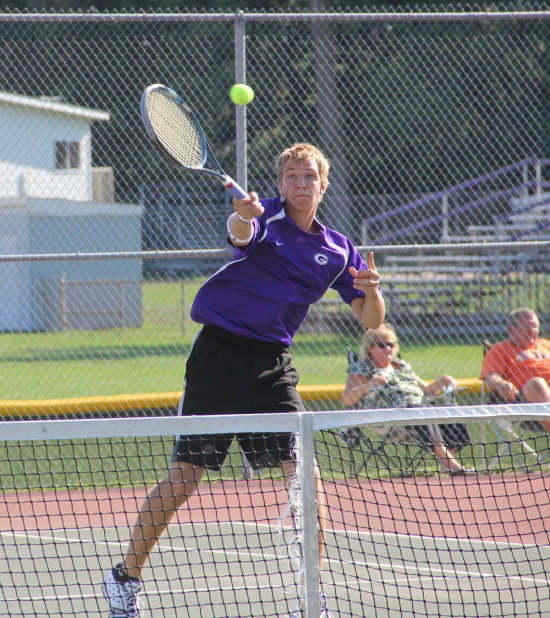 Greencastle No. 1 doubles player Adam Gerard readies to slam the ball while playing at the net during Wednesday's match against Rockville.

Adam Gerard and Jason Ummel won a marathon match at No. 1 doubles. After dropping a close first set, Gerard and Ummel stormed back to win the second set 7-5 tforcing a third and deciding set.

"That was well earned," GHS head coach Sam Hirt said. "It was tough to see it go to three because they should have had it in straight sets, but at least they came through with the win."

The No. 2 doubles team of Alex Asbell and Kaleb Fleming also earned a win after cruising to a 6-3, 6-3 victory. Hirt said his No. 2 squad has been very impressive so far this season.

"They won straight sets at Edgewood too. They're looking good. I'm really happy with the way they're playing, so that's going well," Hirt said.

The Tiger Cubs struggled in singles competition, dropping all of its matches. At No. 1 singles, Landon Miller fell in straight sets 6-3, 6-2.

"It's frustrating right now because,a I think, Landon lost to this No. 1 at Sullivan and both times -- Landon is a more talented player," Hirt said. "He's a better all-around player. That kid has a great forehand, he has some good serves, but Landon is better all-around, I think.

"It's frustrating to see him lose to a guy like that twice, especially in straight sets twice."

Hirt said Waddell has some things to work on to move his game forward and commented how one call may have changed the match at No. 3 singles.

"Mike kills himself," Hirt said. "Mike is a hit or miss (player) and he knows it. He's either hitting hard winners or he's hitting them way out. We have to work on that and how to compete and not just get out there and hit.

"Christian played really well. He had a real unfortunate call at the end of his first set that could have changed the entire match."

Greencastle will compete at Brown County Saturday at 9 a.m.