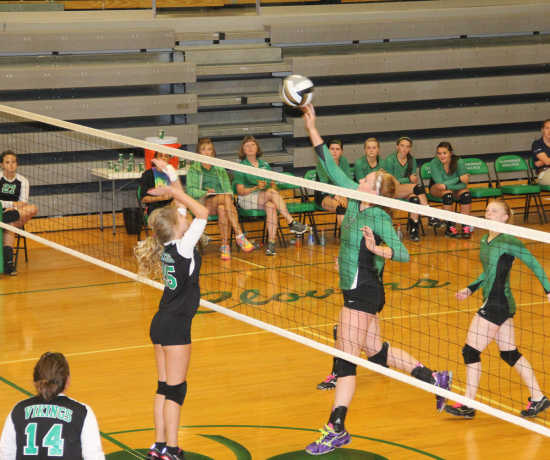 "We're playing good ball right now and it feels really good. Beating Cascade was such an emotional lift for us and just the confidence it built really helped us. We have some goals in mind and this group is focused on those goals," Cloverdale head coach Kathy Moore said.

Cloverdale used a powerful net attack to take early control of the match, not allowing the Vikings to get into a rhythm.

In the first game, West Vigo kept things close early never allowing the Clovers to get more than a three-point lead. However, with the score 13-10 in favor of Cloverdale, the Clovers ran off eight straight points to go up 21-10. They closed out the game with a Bradanne Toney stuff, making the score 25-12.

Cloverdale continued to display its dominant form in the second game, also earning a 25-12 win to take a commanding 2-0 lead into the third game.

Things got interesting in the third game with West Vigo knotting the game at 19-all. It was the fourth tie of the game. Cloverdale closed things out by outscoring the Vikings 5-2. Toney delivered a kill to end the match and give the Clovers a 25-22 victory.

It's been a busy start to the season, but Cloverdale has made the most of its opportunities. Moore said the team is a little tired, but have to turn around and play three tough matches next week including a conference match against Greencastle.

"This stretch for us, this first third of the season, is always grueling because of the number of matches we play," Moore said. "This is a good team, they played well together and they're pretty fearless. They go for the ball and it's fairly rare that they don't get at least a hand on it.

"We had a couple tonight, but give West Vigo some credit for digging and scratching and hustling for every ball. I thought they dug up a lot of hard hits."

Moore acknowledged her team is excited with its play and is enjoying the best start it's had in a long time. She also said she was happy with how hard her team has been playing at this point in the season.

"For being a fairly short team, and we are short compared to a lot of teams, we are scrappy," Moore said. "Nobody give up out there. There are not quitters out there and I have a good bench and I feel like I can go to my bench at any time and feel comfortable. That's a rare thing sometimes."

Next match -- Cloverdale will host Union-Dugger Monday at 6 p.m.