GHS grad sworn in as officer by Secretary of Defense 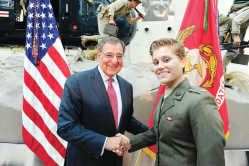 For security purposes, the officer candidates, family and friends were unaware that U.S. Secretary of Defense Leon E. Panetta would be the ranking commissioning officer during their graduation ceremony.

Shortly before the ceremony began at the Marine Corps National Museum in Quantico, Va., the Secret Service ushered in Panetta.

The secretary gave a motivating speech to the candidates and then performed the official swearing-in procedures with each newly commissioned second lieutenant receiving a special coin and congratulations from him personally.

In May, Ehrhardt graduated from IUPUI with honors and was one of 63 selected to attend the Marine Corps Officer Candidate School in Quantico. Only 27 of the 63 completed the program, earning the right to become a commissioned second lieutenant.

Following the ceremony, it is customary Marine tradition that the newly commissioned officer receive their first salute from an enlisted or retired military person, often one of their highly respected officer candidate school instructors.

Although Second Lieutenant Ehrhardt is especially proud of her brother's service in Kuwait, she clearly enjoyed the moment when "big bro" had to salute her based on their respective military ranks.

Micki and Ian are the children of John and Dee (Eilar) Ehrhardt.