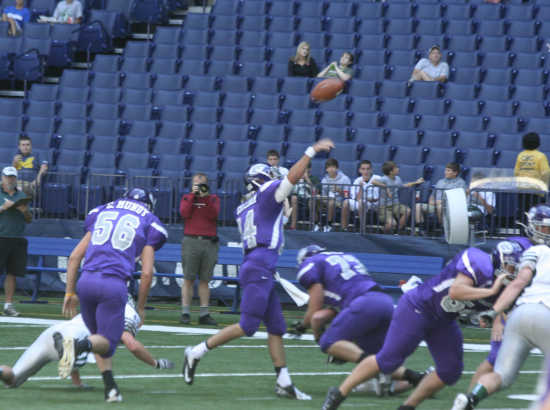 GHS senior Nick Gilliam, shown here against Monrovia, had a big game for the Tiger Cubs passing for 277 yards and three touchdowns against West Vigo Friday.

WEST TERRE HAUTE -- Greencastle went back to the grease board this week and it paid off with a much improved passing attack Friday night at West Vigo High School.

Quarterback Nick Gilliam completed 21-of-35 passes to six different receivers, without an interception, for 277 yards and three touchdowns in Greencastle's 44-0 victory over the Vikings.

"We had to get back on the grease board and do what we do well and that's throw the football. We have an extremely talented quarterback, we have six receivers I'm excited about (and) we got to continue to grow," Greencastle coach Josh Buis said.

Gilliam needed to throw the ball more and Alec Pettit run more because the Tiger Cubs played without Nate Christy, who suffered a concussion in the win over Monrovia at Lucas Oil Stadium. Coach Buis hopes to have Christy back for the Edgewood game next week.

Pettit, who picked up 42 receiving yards on screen plays, rushed for 88 yards and scored touchdowns on runs of five and 35 yards.

Greencastle dominated this game in every way. Not only did the offense score two touchdowns rushing and two passing, but the defense put one on the board when Justin Baxter returned a fumble 77 yards for the final end zone party.

Greencastle's defense has now played seven straight quarters of shutout football. The Tiger Cubs held the Vikings scoreless and limited them to just 158 yards of total offense and came up with five turnovers -- two fumbles and three pass interceptions.

Greencastle's defense slammed the door on West Vigo in the second quarter.

With the Tiger Cubs lead 16-0, the Vikings's Dan Creasey, who rushed for 112 yards, caught the Tiger Cubs on a blitz and ran for 88 yards to the Greencastle five-yard line.

On third and goal from the Greencastle one-yard line, Lewis dropped Creasey for a three-yard loss. On fourth and goal, the Vikings completed a pass, but Shuee made the stop at the one-yard line. Greencastle took over on downs.

The Tiger Cubs marched 99 yards in 15 plays to go ahead 23-0 before halftime.

Gilliam found Shuee, Seth Brown, Pohlar, Pettit and Kellan Alspaugh on pass plays that went from three yards to 19 yards. Plus, Gilliam ran for 22 yards and Pettit for 12 more to balance the attack. Pohlar pulled in the 12-yard touchdown catch. Sedrick Wenschenk's third point after touchdown kick put the Tiger Cubs ahead 23-0 at halftime.

"Greencastle is such a good team and you can't give a team like that opportunities and that's what we did tonight. (If) we had scored it could have been 16-7. It could have been a different ball game," West Vigo coach Jeff Cobb said.

Facing a fourth down and seven from the West Vigo 32-yard line, Greencastle scored when Shuee was left wide open at the goal line.

The Tiger Cubs went ahead 9-0 less than a minute into the second period when Tyler Scott's punt rolled to the West Vigo 1-yard line and on the first snap, West Vigo fumbled into the end zone and was sacked for the safety.

After leading 23-0 at halftime, Greencastle got the ball first to open the second half and immediately scored.

On fourth and goal, Gilliam found Alspaugh open in the end zone for a 13-yard touchdown and 30-0 Tiger Cub lead.

Greencastle plays at Harbison Stadium next Friday night against Edgewood at 7 p.m.