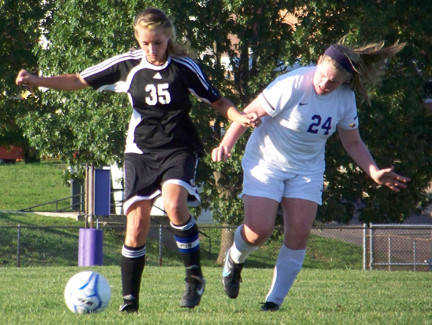 Fresh from the weekend, the Greencastle Tiger Cubs added another win to their season Tuesday night against the South Vermillion Wildcats 5-2.

The Tiger Cubs, determined for a win, set the tone very early into the game, when junior Melody White scored off a crossed ball from sophomore Sydney Secrest in the first twenty seconds.

Not satisfied with a one goal lead, the Tigers Cubs put three more goals on the board before the half, including two more for White and one for junior Rosio Gomez.

South Vermillion came out strong in the second half, trying hard to find a way through the Tiger Cub defense, and ultimately found a crack in the backline scoring their first goal midway through the half.

The Cubs pulled themselves together and added another goal, a career first for sophomore Breanna Ferrand with an assist from Katie Rose Parsons.

The Wildcats refused to back down and continued to push for another goal. They slipped through the defense one last time, and added their second goal of the night just minutes before the end of the game.

Tiger Cub coach Jamie Grivas was pleased with the way her girls played.

"We showed the depth of our bench tonight," she said. "A few girls, including sophomore Breanna Ferrand and freshman goal keeper Emma Hiigel, really stepped up in the second half and showed South Vermillion that we would not back down.

"This was Hiigel's first game experience at the high school level, and she performed beautifully."

The Tiger Cubs are back in action Thursday night at an away game against Terre Haute North.