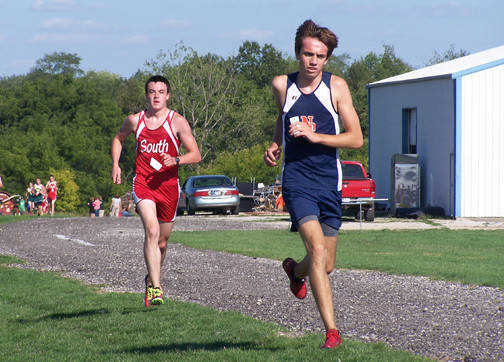 ROACHDALE -- Five of the six member schools of the WCC, along with Eminence, met at North Putnam High School for the North Putnam Invitational Tuesday night.

Cascade nipped South Putnam by a score of 89-91, with Cloverdale finishing tied for fourth and North Putnam sixth out of eight groups in cross country action.

The scoring was based on a co-ed aggregate, with no more than three runners from a boys' or girls' squad tallying in the group total.

Cascade's Levi Musson won the boy's overall race in a time of 17:34. South Putnam's Hunter Barr placed third with a time of 18:11

Jessica Thompson won the girl's race with a time of 21:58. Claudia Monnett of Cloverdale finished second with a 22:36 race.

South Putnam's Juliana Delano finished fifth in a time of 24:19 while Katie Douglas placed 16th for North Putnam with a time of 26:58.

South Putnam head coach Brandon Welti felt both of his squads persevered on day, which was hard for running.

"It was the kind of running I expected today. It was hard to be mentally in the race with the heat and the tough conditions but the squads both competed well," Welti said.

"Juliana Delano ran well in our number one spot tonight. She impressed me throughout the race and constantly moved up through the field."

"Hunter Barr ran well as did most of the guys. Some of them came in ill but hung tough and ran a difficult 5K race today," Welti added.

Welti then said about the Eagle Relay, "It's a low key event for us, even as hosts. We're not under a lot of pressure to compete but need to view it as a tune-up as we'll see several of these teams again."

Cloverdale head coach Kyle Walter said that the early season meet was rewarding for those available.

"We had some good performances tonight but we're looking down the road at how much we can improve by the end of the year," Walter said.

"It's a long season and we're still not quite at full strength on the girls' side, but we should get there in a couple of weeks.

"Having three races this week does put a strain on us, but we should be more competitive Thursday at the Eagle Relay and continue on that path at the Martinsville Classic Saturday," Walter added.

North Putnam head coach Kevin Lutes was optimistic about the Tuesday night race and added that the Thursday afternoon race was a good chance for the squad to learn more about themselves.

"We did well tonight. We've got several kids that started running when school started so this is part of the conditioning we'll need for later races," Lutes said.

"Dalton Spear ran a great race tonight to finish fourth. Katie Douglas ran well, even if she's not at 100% physically.

"Competing at the Eagle Medley is really an extended workout for us because we need to find out how several of our runners will handle different races," Lutes added.

"For our seniors, I want them to have the feeling that they ran as hard as they could against some pretty good competition Thursday."