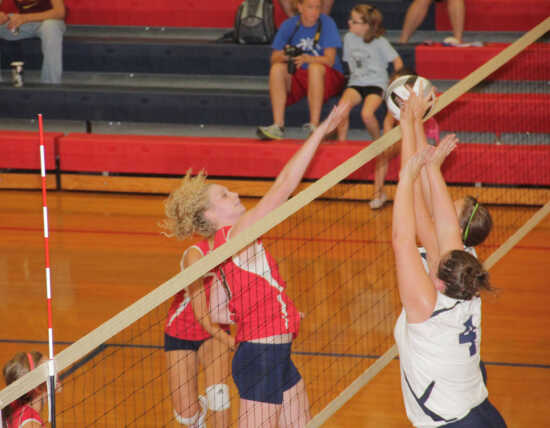 South Putnam welcomed the volleyball squad from Riverton Parke Tuesday. After a close first set and a hard-fought second, the Eagles lost to the Panthers in three sets 25-20, 25-16 and 25-9.

South Putnam head coach Renata Hendrickson said the enthusiasm her team came out with faded as the match went along.

"We were fired up in the beginning I thought. Riverton Parke is a good team and we were digging well, hitting well, passing well and we just lost our fire in that third match. We could have played a lot better," Hendrickson said.

The Eagles came out strong in the first set and battled Riverton Parke on each possession. South Putnam kept things close, but the Panthers were able to build their lead to pull away at the end to score a 25-20 win.

South Putnam was able to grab an early lead, holding its lead until the Panthers tied the set up at 15-all. Riverton Parke moved in front as the match wore on.

The Panthers scored seven straight points for a 22-15 lead.

Following South Putnam's 16th point, the Panthers ended the set by scoring its final three points to earn a 25-16 win.

In the third and final set, South Putnam stopped communicating with each other which lead to multiple errors, allowing Riverton Parke to build a big 10-1 advantage. That trend would play itself out throughout the final set, with the Panthers cruising to a 25-9 win.

"I think the biggest thing is enthusiasm," Hendrickson said of the third set change. "Once a few mistakes were made, we just kind of lost that enthusiasm and that brought us down as a team. The thing is we need to get that back up. We play well when they have it, they just need to keep talking and turn each other on."

Hendrickson said her team would get back to things in practice and prep for Thursday's county matchup with North Putnam.