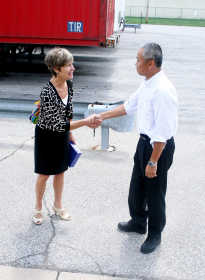 With an "extremely generous gift" in celebration of Heartland Automotive's quarter-century of operations in Greencastle in hand, Mayor Sue Murray asked company officials if there was anything else the city could for them.

"The construction on the road (U.S 231), when will it be finished?" Atsuo Shoda, president of Heartland's parent company, Shigeru Industries, asked Monday afternoon through an interpreter in a statement that lost nothing in translation.

He laughed as Heartland business project manager Ritsuko Abrams, redirected the question in English to the mayor.

"Soon," she said, assuring Shoda she "has been asked that question many times recently."

Mayor Murray, City Council members Phyllis Rokicki, Jinsie Bingham and Mark Hammer, along with City Attorney Laurie Hardwick, called on the visiting Shoda at the East Side facility Heartland has called home since 1987 as the American headquarters for Shigeru Industries of Ota City, Japan.

Their mission was to thank Shoda and his company for a $100,000 donation Heartland recently pledged to the City of Greencastle through its local president, Toshio Kawashima. The donation is being made to help commemorate Heartland's silver anniversary locally.

Kawashima had come to City Hall to see Mayor Murray in a visit she won't soon forget.

"Usually people come to complain or ask us for something," she said. "People don't usually come to my office and say, 'We'd like to give you a gift.'"

Seldom do they ever come with a pledge for $100,000 in unrestricted funds.

"Our councilors are still debating how to use your gift," Mayor Murray told the Heartland contingent. "While we haven't decided yet, whatever it's going to be would not be happening without your support. So we are very grateful for that."

The mayor praised the open house and plant tour Heartland conducted earlier this summer, telling Shoda "the people who came were so impressed by everything that is happening out there, and your employees were very excited to show everyone where they work."

He nodded and smiled in appreciation.

"As time went by (over the 25 years)," Shoda said, "there has not been much time to celebrate with the people of Greencastle and the community," which is why the parent company thought the donation to the city "was a very good idea."

Twenty-five years ago, when Heartland Automotive bought the old Ryan Building at 300 S. Warren Drive, it promised to bring 100 new jobs to a community that had just lost 985 positions with the closing of the IBM plant.

The 107,000-square-foot facility, which IBM used mostly for storage, had been built as a new facility for the Angwell Curtain factory.

Over the past 25 years, the investment in equipment alone by Heartland has been well over $50 million, local officials have noted previously.

"Aside from the road are there any other questions we might answer?" Mayor Murray asked Shoda.

He expressed none but told the city officials that Heartland and Shigeru "really appreciate the community support and help" received over the past quarter-century.