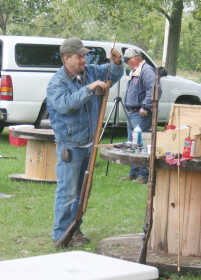 COATESVILLE -- Twelve shooters spent Saturday morning pouring 80 grains of 2F powder into the barrels of 30-pound rifles, packing it down, covering the barrel with sturdy cotton, hammering a lead ball tightly onto it, trimming away the excess patch, then packing that into the weapon with a ramrod, and they did it more than a dozen times each -- a typical weekend for muzzle-loading rifle shooters.

Flint Anderson hosted the event at his home on W. CR 700 South, the second annual J.L. Anderson Over the Log Match.

His father, Jim Anderson, of Reels-ville, is a three-time muzzle-loading rifle shooting national champion, though he retired from competition years ago.

Flint, named after the flintlock gun his father loved shooting, said hosting the event means a lot to him.

Most of the events are memorial shoots, he said, honoring some of the popular shooters from the past. Flint wanted to hold an event for his father while he was still alive so he could appreciate it.

Shooters take aim 60 yards from the target, then fire a few practice rounds before the competition begins.

They intentionally miss the target, which helps keep a constant sight, and they get scored on precision instead of accuracy.

It doesn't matter where they shoot, as long as they hit the same spot every time.

Until as late as the 1950s, muzzle-loaded rifles were more accurate than any other, Jim said.

Bill Distro of Harrison, Ohio won the competition with a 5.035-inch grouping on 10 shots, but chunk shoots are often about more than just who wins.

"What's kind of cool about this is that it's as much of a social event as it is a contest," range officer Robin Warner said.

When the shoot is over the participants feast, share stories and talk about their love of shooting.

Prizes for the match, or Hog Shoot, are chunks of a butchered hog. Winner gets the first pick, then second place chooses, and on down the line until all the meat is gone. 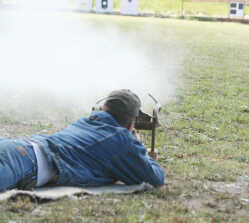 Anderson couldn't seem to find his shot on the windy afternoon and promised to retire his rifle after the contest. Competitors traveled from as far as Ohio and Missouri to compete and socialize.

Flint finished in last place, struggling with the wind, and his fellow shooters gave him a good-natured ribbing each time he took a turn grabbing his chunk of meat.