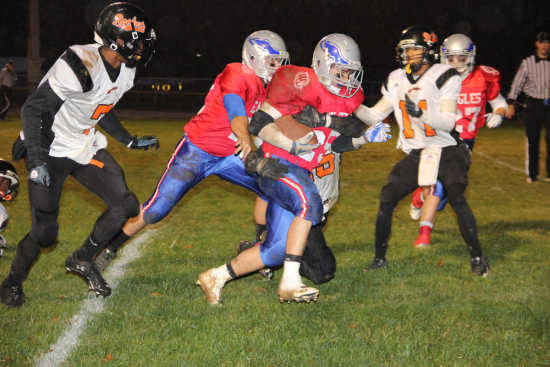 South Putnam sophomore Lucas Lorian busts up the middle for a 20-yard scoring run in the first quarter of Friday's sectional contest.

Entering the postseason at 7-2 and hosting a first round game, South Putnam entered sectional play Friday in a good spot. Unfortunately, the Eagles saw its quest to repeat at Class 2A Sectional No. 30 champions derailed by Indianapolis Broad Ripple.

The Rockets stormed into South Putnam and did what many teams failed to do all season -- run the ball on the Eagles. Broad Ripple road that edge to a 34-21 win to bounce the Eagles from the playoffs.

Broad Ripple won the toss and elected to receive the opening kickoff. Six plays later, the Rockets failed to convert on a fourth-and-seven play to give the ball to the Eagles.

South Putnam wasted little time carving out chunks of yards on the ground and eating up a lot of clock in the process. The drive ended when sophomore Lucas Lorian slammed his way through the Rocket defense for a 20-yard scoring run with 4:12 remaining in the opening period.

Broad Ripple answered on its next drive when Camorrie Shittu hooked up with Shaquille Williams for a 17-yard touchdown strike with 1:13 on the clock.

The two squads traded possession before the Eagles settle down and put together drive that was capped by a one-yard touchdown plunge by Lorian with 5:56 on the clock in the second quarter.

It took the Rockets just four plays to respond when Shittu scored on a 24-yard run with 4:29 left in the half. Following an interception by South Putnam quarterback Sawyer Arnold, Broad Ripple was able to score again, this time with Shittu and Shawn Field combining for a 13-yard scoring strike just before the half ended to take 20-14 lead.

Broad Ripple began to move the ball on the ground against the Eagles, but Burgess thought the real turning point in the game came right after halftime.

"It's why you defer is to get it to start the second half. We just weren't able to move the ball and get anything out of it and they did. I think that was a big turning point."

Broad Ripple scored on two consecutive possessions in the third quarter to seize a 34-14 lead with 39 seconds left.

The Eagles regrouped and took the ball down the field to start the fourth quarter. Big runs by Lorian helped set up a nine-yard scamper by Wes Riner with 10:53 remaining in the game to make the score 34-21 in favor of Broad Ripple.

However, long drives by the Rockets and a costly fumble late all but sealed South Putnam's fate. Broad Ripple ran out the clock to end the Eagles season.

The Rockets rushed for 238 yards on the night, something Burgess was surprised they were able to accomplish under the conditions. Rain fell most the day Friday and continued throughout the contest, resulting in a muddy, slick field. Just they type of environment South Putnam thrives in.

"To be honest, we all laughed about it and thought 'Man, this is the perfect weather for us. Let's get in a mudder with these guys. We're mudders.' Their guys up front are big. They're 330, 350 -- they're big old boys, and I tell you what, they just kind of hunkered down in the mud and made it tough to move.

"Our guys were battled, working their tails off and they were just big and we couldn't get the moved up there."

Even though his team came out on the short end of the game Friday, Burgess was still pleased with how hard his team played.

"It was a good football game," Burgess said. "The kids played hard and I'm proud of them. I don't know what else to say. We just got beat by a better team tonight.

"Broad Ripple, their coach out-coached me and they're kids out-played ours -- we do this thing together," he continued. "It starts with me. I feel that if we get beat, I got out-coached and our played feel like they got out-played.

"We just got beat and those things happen sometimes."

South Putnam ends the season with a record of 7-3