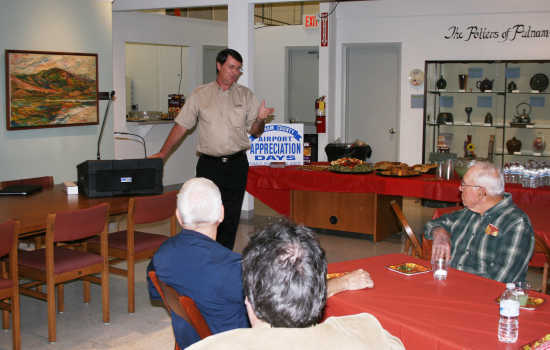 The sky's the limit for the Putnam County Airport.

That's clearly the belief not only of those who have their heads in the clouds but those with both feet on the ground as well.

The airport's stock is soaring, according to the pilots who use it for fun and profit and the businesses that rely on it for transportation and convenience.

Museum visitor Joe Jennings (left) is greeted by local aviation enthusiasts (from right) Corey Harper, the airport planner from Butler, Fairman and Seufert engineers; J.R. Scott, president of the Putnam County Board of Aviation Commissioners, and local resident Jason Clearwater. A reception at the Putnam County Museum Monday evening marked the opening of its exhibit on local aviation and the county airport. (Banner Graphic/ERIC BERNSEE)

That much was easily apparent this week as the Putnam County Museum unveiled a historical exhibit reflecting on the importance of aviation in Putnam County and the contributions of Putnam County to aviation.

Originally compiled as part of the 2012 Airport Appreciation Days observance last month, the exhibit chronicles the establishment of the local airport on Greencastle's East Side with narratives and reflections by some of the area's most famous pilots.

Many of those pilots in attendance for the opening reception Monday evening recalled how the "airport" was basically a grass strip when they first started to fly above the fields of west-central Indiana.

How it went from the grass strip that pilots like Vern Bothwell Jr., Mike Clodfelter and others spoke of during their aerial remembrances to the 5,000-foot-runway facility that accommodates corporate jets and fly-in visits from dignitaries like Bill Clinton and Mikhail Gorbachev is a story to be shared and cherished.

Bothwell, whose 90-year-old father just survived an air mishap at his private airstrip earlier this month, recalled how he started flying when he was 16. He traded operator Steve White his "dollar-an-hour" work around the facility in exchange for flying lessons in a Cherokee 140.

"It was just a grass strip at the time," Bothwell acknowledged, "but everybody pretty much had a lot of fun."

Bothwell recalled a husband-and-wife team of aerial daredevils who often called the local airport home. He asked if anyone remembered the "Flying Pierces." The wife was a wing walker, he said, but no one else had any recollection of the duo.

Putnam County aviation history does document the Sept. 29, 1918 landing by Lt. Maurice A. Sharp in his Curtis biplane. An estimated 10,000 people were on hand to witness the first aviator to land an aircraft in Greencastle.

Called Clover Field at the time, the strip was used as a governmental airmail emergency landing site until Sept. 30, 1930, at which time it was renamed Sharp Field in honor of Lt. Sharp.

In 1935, the City of Greencastle purchased 205 acres of farmland, including Lt. Maurice A. Sharp Clover Field, to construct a municipal airstrip.

The museum exhibit further notes that the Greencastle Board of Aviation Commissioners was organized in 1945. The name of the airport, however, was changed from the Greencastle Airport to the Putnam County Airport in 1971.

The year 1974 saw the Putnam County Airport classified as a Basic Utility II Airport, meaning it had the capacity to primarily serve small-engine and light, twin-engine aircraft.

Among those sharing their flights of fancy was Clodfelter, who said he "grew up at the airport," although he didn't get his own pilot's license until the 1990s.

"My dad had a Cessna 140 when I was a little kid," he said. "I learned to love flying before I could even walk.

"Unfortunately, dad's family planning skills weren't so great," he chuckled, "and he had four kids in five years, so he had to sell the plane by the time I was six."

A former Board of Aviation Commissioners member when he worked for Crown Equipment Corp. (which helped make the expanded runway a reality when it moved to town), Clodfelter is thrilled to have been a part of the success of the facility.

"I've enjoyed the airport," he said, "and it's been very neat to see this airport survive when a lot of others haven't. It's been because of the work of a lot of good people. I don't know how many people realize it, but the (Airport) board is uncompensated. We do it because we love it."

Dr. Perry Wainman, the longtime Greencastle dentist, is another who has been intrigued by flying since he was young.

"It's something I've always loved," Wainman said. "I started flying back in 1968 but ran out of money for it because of dental school."

Wainman said he received his pilot's license on Aug. 8, 1986 will Bill LaFoe teaching him the ropes. In the meantime, he may have looked down, but he's never looked back, continuing to fly for pure enjoyment.

"We owe a lot to the EAA Chapter, which has been a very instrumental part of our airport," he said, "and to Dixie Chopper for what it has done out there."

The airport exhibit was credited as the brainchild of J.R. Scott, current president of the Board of Aviation Commissioners.

"About four years ago, I messed around and got myself on the board," Scott said. "I started asking a few people some questions, and they would refer me to somebody else and they'd refer me to someone else. Nothing concrete could be found."

Scott's efforts at historical research motivated others to delve into the airport's past and put reminiscences on paper.

"If J.R. hadn't kicked us all around, we wouldn't have gotten started," airport planner Corey Harper of Butler Fairman and Seufert said.

"We really wanted to get the information gathered together as a storehouse so questions like these wouldn't need to be asked again," Harper added.

Many people involved in the airport through the years have donated artifacts representing the facility's history. The exhibit includes objects ranging from old-fashioned plane propellers to airplane replicas to actual aerial footage. Photographs, newspaper clippings and even telegrams communicate the personal stories that have helped create Putnam County's aerial history.