Balanced Tiger Cub attack will be key against Bruins 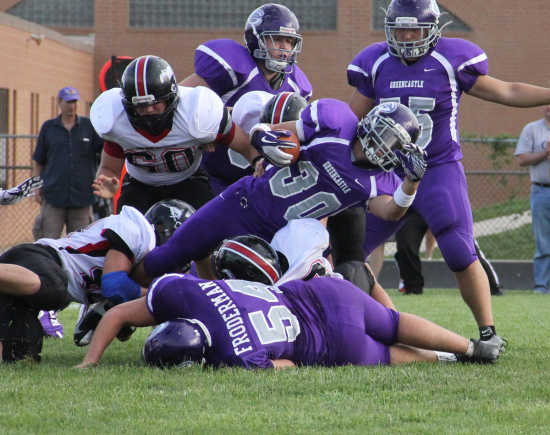 "Perfection is not attainable, but if we chase perfection we can catch excellence."

However, the Greencastle football program is doing its best job to prove the legendary coach wrong. This season, the Tiger Cubs have demonstrated excellence on the field on both sides of the ball and their chase of perfection is still intact as they sport a 10-0 record entering Friday's sectional game against Tri-West.

Tri-West enters Friday's game with a 8-2 record and is coming off a big 37-0 win over Indianapolis Arlington. Greencastle head coach Josh Buis knows the Bruins are a tough foe that stands between them and the sectional final.

"Tri-West is a very good football team," Buis said. "They're playing with a lot of passion. They have a chip on their shoulder after the Danville game.

"Our kids know who they're kids are -- they know each other. Tri-West is a great program. They're very well coached, they have a ton of tradition, they have great facilities and I think Greencastle's ready for that challenge. I think Greencastle is ready to play a team that's ranked high up in the state, especially at the 3A level."

In the past 15 years, Greencastle and Tri-West have met four times, with the Bruins winning all four matchups. They're last meeting came on Oct. 23, 2009 when the two hooked up in the sectional final.

Tri-West was able to edge the Tiger Cubs for the win in that contest, but Buis acknowledged both teams have made big strides since then.

"I think Greencastle is a little different of a program than we were then, but also I think Tri-West is a different program," Buis said. "I think we're two very good 3A teams. I think we play one of the toughest sectionals in the state and I think both of us get a bad rap.

"To be honest with you, going into sectional, most people thought we were the fourth and fifth best team in the sectional," he continued. "I think we both got fortunate draws. We all know the history of Bishop Chatard and I'm sure both teams and coaches are chomping at the bit to have an opportunity at them.

"Not to say that Brebeuf can't win, because they're pretty good too."

As it has done seemingly all season long, rain is scheduled to make an appearance during Friday's game, but that suits Buis just fine.

"Out of all the things I've heard this game, I think one of the truths is that if a wet game does occur, that helps us out just because of the style of offense they run," he said. "They've had some injuries early and I think they changed their offense after week two. They're almost empty every snap throwing the ball and any time you got a wet ball and them being in shotgun 90 percent of the time, I think it plays in our favor.

"But I can assure you, if it rains outside, they're just not going to cancel the game. We have to make sure we show up, get to the quarterback from our guys up front."

Greencastle has attained it 10-0 record by displaying a good blend of offense all season long. When starting quarterback Nick Gilliam went down with a hand injury in week three against Edgewood, backup Tyler Scott entered and the Tiger Cubs didn't skip a beat.

"That's benefited us all year," Buis said. "Like some of the things we do defensively, switching things up each and every week, our offense has the potential to either run for 400 yards or throw for 400 yards."

Entering Friday's game, there's been a lot of chatter that Tri-West is the clear favorite because the West Central Conference experienced a down year. Buis pointed out that in recent years it was members of the WCC who were making some noise in the tournament.

"I think a lot of people think our conference is down. But if you look, we've had quite a bit of teams play for state championships the last five years," Buis said. "We have a tough schedule, probably not as tough as Tri-West to be honest, but the thing I want to see is that we've gotten better each and every week."

Buis commented that his squad has worked hard to be where it is are and this year his team has become students of the game, not just players. He also explained the importance his seniors play on the team.

"We have a lot of seniors that are just an extension of the coaching staff and I think that's the difference between what perception and reality is," he said. "People don't understand how hard these guys have worked and how bad they want to win."

Greencastle has experienced success during the past two season, but as Buis said, the team has a history that wasn't so successful, and they don't shy away from it.

"We're not far removed from being 0-36 here." Buis said. "I tell our kids all the time, 'it's part of your heritage, it's part of your bloodline.' That's who we are. We were part of that and we have to continue each day to strive that to get better and make sure that something like that never happens again to this school or this community."

Sectional 21 features four team that are highly ranked in the state, and according to Buis, whoever makes it out, has a good chance of reaching the state finals.

"Bishop Chatard probably has the toughest path having to go through Danville and Brebeuf. I feel that we got a fortunate draw," Buis said. "That's not to say that West Vigo is not a good football team because that's a conference championship team there. I think that Tri-West probably likes their draw a little bit better than ours. I'm sure after the selection show came out, a lot of Tri-West fans thought they would be playing Bishop Chatard for the sectional championship.

"Hopefully, with a lot of hard work and a lot of game planning, we can make sure that doesn't happen on Friday night."

Greencastle will host Tri-West at 7 p.m. in the sectional semifinal.