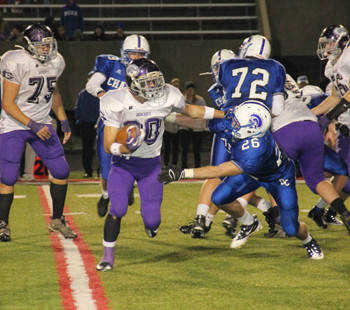 Greencastle running back Nate Christy fended off the Bishop Chatard defense, finishing with 78 yards and a touchdown on Friday, but the effort wasn't enough as the Tiger Cubs suffered their first loss off the season in the 2012 sectional final matchup. (Banner Graphic/CAINE GARDNER)
Order this photo

INDIANAPOLIS -- Entering Friday's sectional final showdown with powerhouse Bishop Chatard, Greencastle had ideas of how the game might go. But as the opening drive by the Trojans indicated, it was going to be a long night if you were a Tiger Cub fan.

The Tiger Cubs (11-1) saw their perfect season come to an end, suffering a 50-7 loss to Bishop Chatard in the sectional final.

"We didn't want it to be this way, but you win some and you lose some," GHS head coach Josh Buis said. "The kids fought hard all year long. We have a tremendous senior class that lead us to an 11-0 season before we faced Bishop Chatard tonight.

"I think the community, the school, the coaches and the underclassmen should be proud of this senior class and what they've been able to accomplish in 2012."

The Trojans received the opening kickoff and marched down the field in eight plays, with running back Peter Hartley taking the ball in from 21 yards out for the game's first score with 8:22 on the clock.

On the flip side, Greencastle's first drive was a quick three-and-out, but the sideline was raucous after the Tiger Cubs forced the Trojans to do the same.

However, a superb punt pinned the Tiger Cubs on their own one-yard line and things took a turn for the worst.

On the next play, senior quarterback Nick Gilliam tried a sneak, but the Bishop Chatard defense sniffed it out and sacked him in the end zone for a safety to make the score 9-0 in favor of the Trojans.

Greencastle's offense continued to struggle throughout the first half, while the Trojans were firing on all cylinders.

One bright spot for GHS in the first was a big stand at the goal line just before the half.

The Trojans put together an impressive eight-play drive that covered a good deal of real estate and were threatening another score with less than 20 seconds remaining in the second quarter.

Bishop Chatard quarterback Sam Neighbours dropped back and tried to hit a receiver over the middle at the goal.

The ball disappeared into a sea of players from both squads; then came the shoving and, ultimately, everyone looking around trying to get a handle on the situation.

Finally, the referees blew their whistles and signaled it was Tiger Cub football. GHS ran out the clock and went to the locker room to regroup for the second half.

Greencastle hoped to shake off its first half woes and put together a scoring drive to start the second half. The drive turned out to be a touchdown, but not the kind Greencastle was wanting to see. 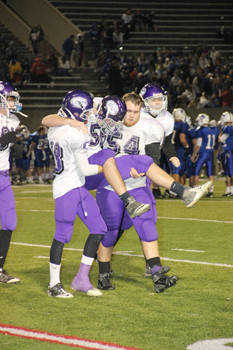 Following two Gilliam rushes to start the second half, the senior quarterback dropped back and was hit as he fired a hard shot down the field. Bishop Chatard defender Sean Parsons jumped the route, intercepted the ball and was off to the races to put the Trojans up 36-0 with 10:22 in the third quarter.

Greencastle's scoring drought came to an end late in the contest.

Christy took the handoff from Gilliam and began to dissect the Trojan defense. He zigzagged his way through the defense and out sprinted two Bishop Chatard defenders for a 69-yard touchdown run with 1:40 remaining on the clock.

Buis said following the game that it was nice to see something go in favor of the Tiger Cubs, so they could have something positive to close out their season.

"It's always positive when you can end on a positive note with that touchdown," Buis said. "We have to continue to get better; continue to grow. And the senior class has done a great job establishing a program built upon a foundation that last year's seniors accomplish.

"The sky's the limit for this program, the future's bright and we're excited to get started next year."

Christy led GHS in rushing with 78 yards on 12 carries, with Gilliam adding 29 yards. The Trojans' Hartley led all rushers with 131 yards on 22 carries.

Although Friday's loss marked an end to the Tiger Cubs impressive run, Buis said competing against a talented team such at Bishop Chatard will only make his program stronger.

"We have some great young players coming back and the sky's the limit for this program."