Some facades likely done in December, others in spring 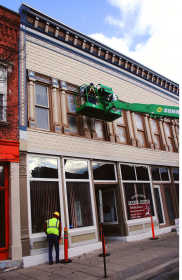 Painting work on the renovated facade at the Senior Center, 9 W. Franklin St., continues Friday on the north side of the courthouse square as workmen from Advanced Restoration Contractors try to beat the advance of cold, wet weather.

With the chances of good-weather days dwindling and the calendar counting down toward 2013, activity on the facade project in downtown Greencastle is facing a slowdown.

That doesn't mean, however, there hasn't been a flurry of recent action as employees from Advanced Restoration Contractors (ARC) not only worked last Saturday and Sunday but were also on the job again Friday while most of the world was shopping or recovering from a day of turkey and stuffing.

And despite Friday's near-freezing temperatures and gusty winds, ARC employees were trying to put the finishing touches on the decorative trim at the 9 W. Franklin St. building that houses the Senior Center.

"It does look stunning, by the way," noted Brent Mather of Brenner Design, senior project manager on the facade portion of the city's Stellar Community Grant work.

"It looks beautiful," City Attorney Laurie Hardwick added as others nodded in agreement.

The facade work not only has power-washed away years of rust and grime from the top of the painted front but has uncovered patterns around the windows and across the top of the building that now have been accentuated by blue paint.

And gone is the scaffolding that had blocked the sidewalk on the north side of the square much of the past few weeks.

Overall, one of the facade project goals is to finish some of the buildings in December, while others in Phase I of the effort will likely take until March or April to complete, Mather said.

"Weather will be the biggest problem moving forward," he noted, adding that "Jason and his crew have been working very diligently to get as much done as possible."

He also pointed out that Miller has leased an upstairs apartment above Almost Home and plans to be available on site much of the winter. However, only a skeleton crew will remain if they can't paint or do masonry work on outside projects.

Winter work downtown will include interior items, such as the stairway to the second floor at 25 W. Franklin, which is being moved inside and off the side of the now-brick structure owned by Tad and Amy Robinson.

Mather and Miller presented a number of change-orders for facade construction work necessitated by surprises discovered in the process of the renovation effort.

The most expensive of those approved Wednesday evening was a change-order on the project at 16-20 E. Washington, a storefront owned by Perry Wainman. 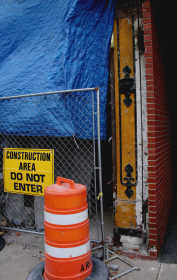 Meanwhile, part of the old cast-iron front of a portion of the Shuee's building at 20-24 N. Jackson St. is revealed by facade work on the west side of the square in Greencastle.

After removing the old facade, workers discovered that a six-inch piece of limestone that created a ledge that ran the width of the property and matched the other storefronts on either side of it had been removed in a prior project.

Properly cleaning the brick and restoring the limestone ledge is expected to cost an additional $17,500.

Meanwhile, an additional $5,800 is needed for architectural work on the property at 17-19 S. Indiana St., owned by Dr. Thomas Black. The new facade faces a redesign to incorporate the newly discovered stone arches that had been hidden by earlier work on the building.

Brenner Design has met with the state historic preservation office concerning the arches and is expected to have new estimates on necessary work at a special meeting on Dec. 5.

A $9,844 construction change-order on the Shuee's property at 20-24 N. Jackson St. stems from the discovery that in creating the two bay windows in the storefront, an original middle support column for the second floor was removed. That was possibly done in the 1970s when one section of the building housed Mary Tarzian's antique store and the other side was home to the Banner Graphic before its current office was built.

Currently a wooden post is being used to provide additional support for the second floor of the Shuee building, maximizing safety until a new cast-iron column can be fabricated to match the others.

A steel beam across the tops of those columns is not continuous along the width of the storefronts, Mather said, since being removed sometime in the 1950s.

Work on the Shuee's facade will include reducing the number of doors into the building and moving the storefront slightly forward, he added.

Facade efforts on the Shuee site will be accelerated, Mather said, because it is an inhabited structure, unlike the vacant former Goodwill store at 21 N. Indiana St.

The front of the old Goodwill site will likely be temporarily tarped over through the winter, Mather noted.

The good news, Mayor Sue Murray pointed out, is that the "buildings where we have had surprises were the ones that were covered up."

That was one of the reasons those buildings were included in Phase 1 of the facade project. Phase 1 work was partially funded by a $1 million portion of the Stellar Community grant, while only $500,000 is available through grants for Phase 2.

"We don't expect any surprises in Phase 2," City Attorney Hardwick said, noting that the shingled front of Moore's Bar and the storefront at 21-23 S. Indiana St. are the only facades to be included that are currently covered over.