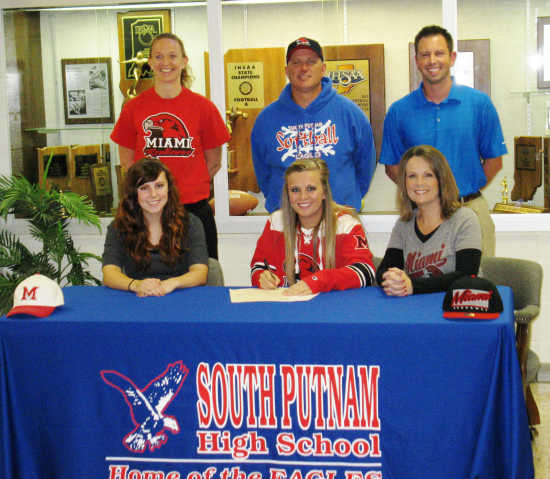 The success of the South Putnam softball team in recent years has manifested itself not just on the field (back-to-back state championships), but also in its players future.

SPHS senior Jenna Jones, an infielder for the Eagles, recently signed her letter of intent to play softball at Miami University.

"It was between Ball State and Miami," Jones said of her choice between the two Mid-American Conference rivals. "When I saw the (Miami campus), I fell in love with it.

She never contacted the school, as she had other places.

"It all happened within a month," Jones said. "I went and played a game there, they saw me -- liked me -- and watched me again.

"I went to a camp, they watched me at one more tournament. It was all within four weeks."

Jones went on her official visit this summer, received a scholarship offer from the coaches, and two days later made her decision. It was Miami.

Then the coaches that recruited her left.

The school agreed to honor her scholarship offer, but the other 2013 recruits decommitted. Jones had a school but no coach.

"It was me waiting. 'Who is this new coach going to be? I hope she likes me,'" Jones said. "I think everything happens for a reason. I'm a big believer in that. So when my coaches left, I was like, 'OK, this happened for a reason. I just have to wait and see what it is.'"

In August the Red Hawks hired Clarisa Crowell, an assistant at Oklahoma State, to be the new head coach.

"The first time I talked to Coach C., we talked for like an hour and a half on the phone," Jones said. "After I talked to coach C. and after I met her, I knew that's why (I waited)."

Jones said she is focused on working hard now so she can do everything she can to put herself in position to play as a freshman at Miami.

She hit .395 last year with five home runs, and will look to improve on that as she takes on a leadership role with the Eagles this spring.

Jones plans to major in sports, leadership and management (SLAM) while playing for the Red Hawks, and hopes to become a graduate assistant while she attends law school after her playing career ends.