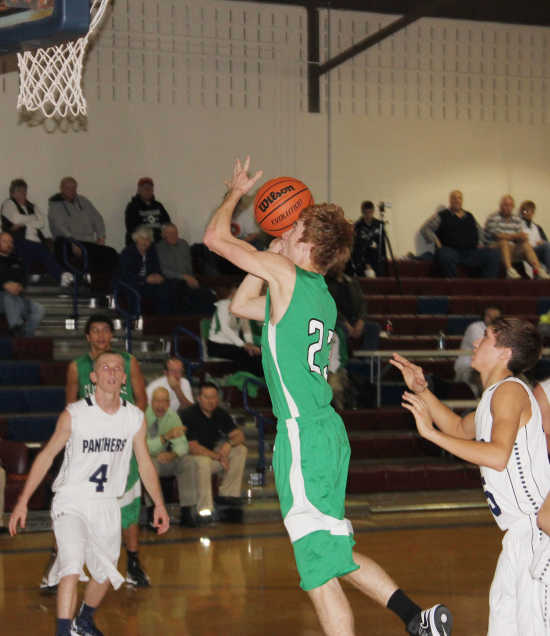 Cloverdale junior Brandon Dorman (23) drives to the basket for a layup. His tip-in as time expired against Riverton Parke gave the team its first win of the season. (Banner Graphic/GRANT WIEMAN)

Dorman's shot came after junior forward Kedrick Collet raced the length of the court in under four seconds, got all the way to the basket and had his game-winning attempt rattle out.

In one motion, Dorman grabbed the rebound and put his shot up.

"When you win a one-point ball game, every kid has done something that we wouldn't have won if he hadn't done it," CHS head coach Pat Rady said. "It's a team win."

With a first half that saw the Clovers make only six-of-20 shots (30 percent), they were lucky to even be in position to get the win.

"I think the shooting will come," Rady said. "Maybe the shot selection, at times, might be a factor. But some of it is just good, hard practice; coming in and putting a lot of shots up in the morning or staying after practice. Shooting is just muscle memory and reflex."

It took more than four minutes for CHS to get on the board -- a three-point basket from junior Kade Schroer ending the drought -- and the team scored just five points in the opening period.

Although the offense failed to show up in the first half, solid defense was constant throughout.

Cloverdale mixed in a 2-3 zone to compliment its 1-2-2, which helped the team use its length and versatility as an advantage.

"We worked on defense the two days that we had (of practice since Tuesday's game)," Rady said. "We put that (2-3 zone) in after the game against North Central.

"We're still learning. We've got a lot of things to learn and we've got to have patience."

CHS trailed at halftime, 18-14, but found its offensive rhythm early in the third quarter.

The Clovers sank their first three shots and finished the period seven-of-11 from the field, taking a 31-27 lead into the fourth.

The Panthers used a drive-and-kick attack and retook the lead, 39-38, on a jump shot by senior Brendon Bovair with 1:40 left.

Cloverdale answered on the next trip as Schroer sank his fourth three of the game to retake the lead.

Bovair, who finished with 16 points, then ran to the left corner and sank another three with less than a minute left. 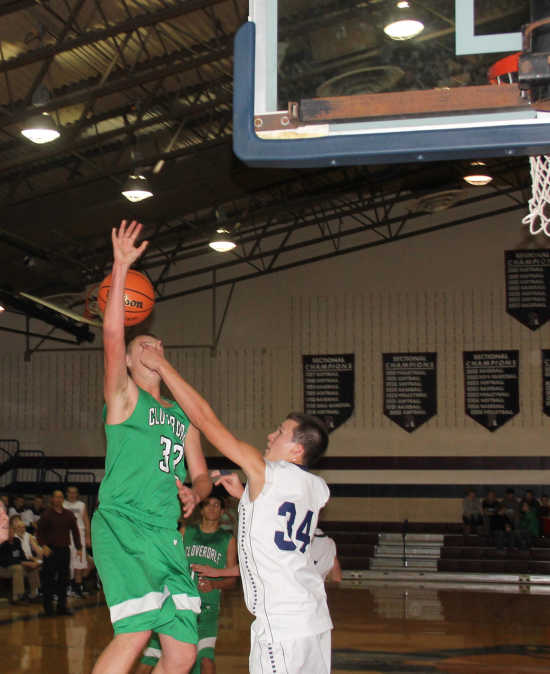 Cloverdale sophomore Brantson Scott (32) draws a foul from Riverton Parke sophomore Tanner Edge late in their game on Saturday. Scott made both free throws to give the Clovers the lead in the final minute. (Banner Graphic/GRANT WIEMAN)

With the lead, the Panthers called a timeout to set their defense, but Cloverdale got the ball inside to sophomore center Brantson Scott. He drew a foul and went to the line.

Riverton Parke called another timeout to set up its final play.

Scott sank both free throws, giving his team a 43-42 lead with 43 seconds left.

The Panthers inbounded, advanced the ball then worked the clock to under 10 seconds. Senior Matt Haltom, who finished with a game-high 20 points, sank a contested 15-foot jumper from the top of the key.

Collet raced the length of the court, and Dorman's follow gave his team the lead.

"I'm not a big believer in calling timeout because I think the defense has a chance to set up," Rady said. "(Collet's) instincts were to take it to the basket and we had a great kid that followed. I'm a great believer of, when you're only down one, you take the ball to the hole."

"I wasn't really getting after the kids tonight," Rady said. "I wanted the kids to play hard, play smart, hustle and smile."