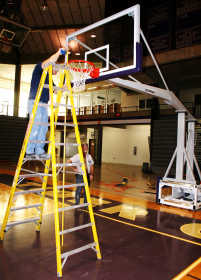 In a moment reminiscent of the film "Hoosiers," Bryan Carrel of Latinia Sports Group, Champaign-Urbana, Ill., measures to make sure the basket is 10 feet from the floor as a new set of goals are installed Thursday at Greencastle High School's McAnally Center.

Your eyes won't be deceiving you. The old arena will have a new look tonight when the Putnam County Boys' Basketball Tourney opens play at Greencastle High School's McAnally Center.

Free-standing, portable basketball goals, the kind you see used at major college games as well as in the NBA, will be in place at both ends of the McAnally court for the first time.

A crew from Latinia Sports Group, Champaign-Urbana, Ill., has been on the scene since early Wednesday, installing the two Porter basketball goals that are now anchored to the McAnally floor (two anchors in the concrete and two more in the wooden edge off the playing surface).

The floor models are replacing the basketball goals that have been suspended from the gymnasium ceiling as long as Jess McAnally's name has been on the building constructed in 1968.

The suspended basketball goals at the east and west ends will be taken down over Christmas break, Greencastle athletic director Kelly Lewis said Thursday.

However, the four suspended goals along the sides of the court, used for practice and PE classes, will remain. They are not considered the potential safety risk that the two main goals are, school officials have noted.

The lengthy metal supports to those goals, which hang from the peak of the domed McAnally roof, have actually sagged over the years, maintenance coordinator Troy Remsburg said.

The movement is more likely the result of a combination of use (including mechanically moving the baskets up and down) and the building settling over more than 40 years, however, than any abusive Putnam County dunkers hanging on the rim.

Measurements taken recently showed that the baskets had now sagged to a height of nine feet, 10 inches instead of the standard 10 feet.

While there certainly hasn't been a lot of dunking action on those baskets over the years, Remsburg recalled how a team of Big 10 All-Stars, including Indiana Hoosiers Calbert Cheaney and Chris Reynolds, were ready for some slamming when they played at McAnally in 1993.

However, Cheaney supposedly took one look at the massive supports to those baskets and said there was no way he was dunking the ball, apparently fearful of bringing the whole thing down from the ceiling. 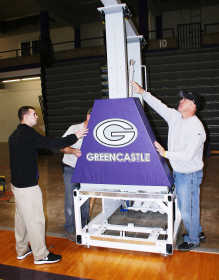 But Reynolds, a 6-foot guard with spring in his step, dunked anyway, leaving the basket and goal swaying in the aftermath, Remsburg recalled.

And that was almost 20 years ago.

Apparently, however, that safety issue was never accentuated by the McAnally curse, long blamed for the Greencastle boys' sectional title drought after winning the very first basketball sectional in the building (1969) until the 1988 Elite Eight team finally triumphed.

But McAnally Center, once called the most under-utilized facility in the school system, can be about more than just basketball.

"I also think it makes the gym more versatile," Zac Remsburg added, knowing that the portable basketball goals can be moved away to facilitate a better playing area for volleyball and other activities, as well as creating better vantage points and stage set-ups for possible concerts such as the Brad Paisley and Charlie Daniels shows McAnally has hosted over the years.

"We can host anything in here now," Zac Remsburg added. "The way it was had kept us from having the volleyball sectional or regional."

The change, he said, "makes the whole space look bigger."

Placement of the Porter goals will require some modification to the bleachers at either end. While the original plan indicated three rows of seats would have to be removed from those ends (likely from the back of the lower bleachers, closing the upper access point in the process), Lewis hasn't given up on a different option.

He thinks a center section of the bleachers could be cut back to accommodate the standards, keeping the other ends in tact where they come within two feet of the edge of the hardwood.

As now placed, the supports for the portable goals would extend four feet back into the end bleachers if they were fully pulled out.

The goals will be padded in purple, while the bottom and sides of the backboard will also be padded. For now, the board won't be wired to come on outlined in red lights at 0:00.

Meanwhile, the next project at McAnally is expected to be redoing the McAnally court itself next summer, Lewis said.