He was born on July 29, 1930 in Greencastle to Lawrence E. Bruner and Sarah E. Kendall Bruner.

Bob was a graduate of Greencastle High School and a veteran of the U.S Navy, serving during the Korean War. 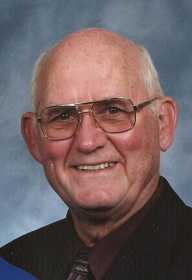 He had been employed at Black Lumber, Home Laundry, IBM and Walmart Distribution.

Many summer vacations were spent with his family at the Putnam County and Indiana State Fairs. He took great pride in raising and showing Columbia sheep, receiving many awards at the local, state and national levels throughout the years. One of the top accomplishments was winning the Supreme Champion Ewe at the Kentucky State Fair in 1998.

Bob was a lifelong member of 4-H, and instilled those values in his family which has become a family tradition. He enjoyed following his grandchildren's 4-H activities during their 4-H careers.

Bob and his family were named 1970 Putnam County Sheep Family of the year. In 2000, Bob received the highest honor from the Indiana Sheep Breeders Association, the Oren Wright Award. His final activity at the state fair was being the oldest Barn Boy in the Sheep Barn.

A gifted and talented wood worker, Bob used his gift to build many structures with family and friends, including the Store House Church in Greencastle.

His parents and his three brothers, Chester, Ralph and Jim, preceded him in death.

Funeral services will be conducted at 11 a.m. Monday, Dec. 3 at Bittles and Hurt Funeral Home, Greencastle, with Pastor Patrick Smith officiating. Interment with Honors will follow at Boone-Hutcheson Cemetery.

The family will receive friends on Sunday, Dec. 2 from 2-6 p.m. at the funeral home.