The silver screen has experienced a great year in 2012. When narrowing down my list for my year-end Top 10, I found it hard to find the space to fit in some of my favorites and that was tough.

Some of those favorites such as "The Hunger Games," "The Avengers," "Chronicle" and "Safety Not Guaranteed" failed to make the final cut, but it was great going back through my list and realizing how many good films I've seen this year.

But when the dust settled, it was a story of Jean Valjean that captured the top spot, barely nipping a horror film most people overlooked.

So sit back, grab some popcorn and see what made my year-end Top 10.

Bradley Cooper and Jennifer Lawrence are the best things about "Silver Linings Playbook." The story holds its own, but Cooper's powerful performance as a man struggling to get over his wife leaving him is what makes the movie a winner.

My only beef with the film is it loses steam as it goes. I thought Cooper was unbelievable and one of my top contenders for Best Actor, but the script failed him late and his character has a weak ending.

Like with "Silver Linings Playbook," "Hitchcock" benefits for two wonderful performances from its lead actors. Anthony Hopkins is almost unrecognizable as Alfred Hitchcock and Helen Mirren stars as his wife Alma Reville.

The film explores their relationship as the famous director makes one of his greatest films, "Psycho." Director Sacha Gervasi gives the film a unique style, especially the opening and ending, and gives us a delightful film in between.

8. Rise of the Guardians

Every year an animated film lands on my Top 10 list. I was certain that movie would be Pixar's "Brave," but that spot was taken by "Rise of the Guardians," a film that features Santa Claus, Easter Bunny, the Sandman, the Tooth Fairy and Jack Frost, as well as the boogeyman.

The film features a wonderful story, interesting characters and strong performances from its voice cast such as Alec Baldwin, Hugh Jackman and Jude Law. The film might have gotten lost in the Christmas shuffle, but do yourself, and your kids, a favor and check it out.

Denzel Washington is at it again -- playing flawed lead characters to perfection. In "Flight," he takes it to the extreme as an alcoholic pilot whose plane experiences technical issues and crashes, killing six people.

Now his once-private life is under the microscope and everyone around him puts the pieces together to keep the blame from landing on him. However, he's his own worst enemy and derails their attempts every step of the way.

A great ending as well as Washington's top-notch performance keeps his movie from crashing and burning.

If Wes Anderson is known for anything, it's making quirky films that resonate with audiences. He keeps his record perfect with "Moonrise Kingdom," a sweet story of two young people in love.

Set in 1965, Sam (Jared Gilman) and Suzy (Kara Hayward) carry out a secret pact to run away with each other and spend the next few days hiking their island in New England until reaching their romantic destination in a secluded cove.

Gilman and Hayward give brave performances as the two young people in love, while Bill Murray, Edward Norton, Bruce Willis and Frances McDormand give wonderful performances in supporting roles.

5. Beasts of the Southern Wild

"In a million years, when kids go to school, they gonna know: Once there was a Hushpuppy, and she lived with her daddy in The Bathtub."

Those words are spoken by Hushpuppy (Quvenzhane Wallis), a six-year-old girl living in the Louisiana bayou community known by the locals as The Bathtub. Standing between The Bathtub and the rest of the world is a levee and it's that levee that destroys their way of life when a huge storm hits.

Hushpuppy, along with her rough father Wink (Dwight Henry) and other survivors of the flood, band together to survive until the waters recede.

As her father's health begin to fail, Hushpuppy comes into her own, ventures out to find her mother and returns to The Bathtub to tend to her dying father.

Since it's release, "Zero Dark Thirty" has been met with politicians criticizing its scenes of torture, but Kathryn Bigelow's film depicting the raid that killed Osama Bin Laden, and the decade leading up to it, is a great achievement.

Bigelow and screenwriter Mark Boal finished a version of the film before the death of Bin Laden and did a quick about-face, trashed their original project and went full steam ahead on what would become "Zero Dark Thirty."

The film isn't always an easy watch with depictions of torture, but the realism is amazing. We get to see relationships built and then torn apart as a decade of hunting for Bin Laden takes its toll. The film builds slowly, but once you get to the actual raid, you won't be able to breathe for the final half hour of the movie.

Jessica Chastain gives a breathtaking performance as Maya, the woman who spends nearly a decade being consumed by the hunt for Bin Laden. She will be undoubtably be battling for Best Actress when the Oscars roll around.

Freddie Quell (Joaquin Phoenix) is a sex-obsessed World War II vet that struggles with alcoholism as well as post-traumatic stress syndrome following the war. As he staggers his way though life following the war, he stows away on Lancaster Dobb (Phillip Seymour Hoffman), also known as "The Master," and becomes one of his followers.

Even though others excel under Dobbin's suspect teaching methods, Quell continues on his self-destructive route and the distance between the men grows. Finally Quell is given the ultimatum by Dobb and his wife Peggy (Amy Adams) to either join "The Cause" and devote himself to it or leave and never return.

Phoenix is one of the leading contenders to win the Best Actor award at the Oscars. Phoenix is creepily amazing in the role as Quell. His physical appearance and actions are an extension of the inner demons Quell battles every second of every day.

2. The Cabin in the Woods

I am a huge fan of horror films, but the recent trend of what I like to call "torture horror" films like the "Saw" franchise had me wondering if we could ever reclaim the genre for what it is. Thank goodness Joss Whedon and Drew Goddard had the same thoughts.

Whedon and Goddard got together, pounded a script and gave fans "The Cabin in the Woods," a film so fun to watch it almost found its way into the top spot on my list.

In true horror fashion, it follows a group of college kids into the woods as they set out for a weekend of debauchery. However, the twist is all of their actions and scenarios are manufactured, or at least influenced, in a controlled room hundreds of miles away. If that isn't bizarre enough, it's all a ritual to satisfy the "Ancient Ones."

If you need your faith restored in the horror genre, or simple love having a great time watching a movie, "The Cabin in the Woods" is the film for you. 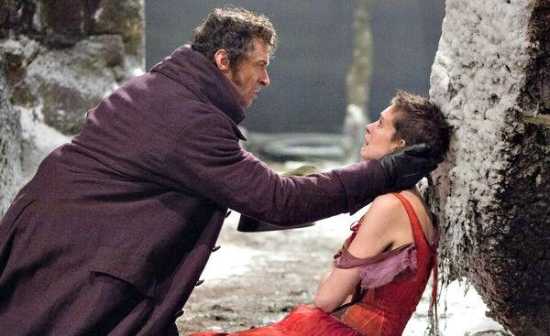 A far cry from the film that took the No. 2 spot, Les Misérables is a musical with a revolution as a backdrop. Critics are divided on the film, but in my opinion, it is the best cinematic offering of 2012.

"Les Misérables" is an epic presentation of Victor Hugo's beloved novel of the same name with Hugh Jackman and Anne Hathaway giving Oscar-worthy performances as the film's two most compelling characters.

The biggest achievement for the film is the fact director Tom Hooper made the choice to have the singers perform their songs live on the set instead of hitting the studio for a slick-sounding audio soundtrack. The result is the audience is consumed by the emotion of the characters, even when notes are sharp or flat or slightly off-key.

This is Hooper's first film since winning the Oscar for Best Director for "The King's Speech" and he should once again find himself on the shortlist of nominees.

The movie isn't an easy watch by any means. It is emotionally tiring and Hooper's choice of using a lot of close-ups can be a little claustrophobic, but the film as a whole is amazing.

"Les Misérables" is a definition of a musical, with almost every line in the movie being sung. The movie is being billed as an epic movie experience audiences need to see and I would recommend you treating yourself to a viewing. Be prepared for Hathaway to walk away with every Best Supporting Actress award during the awards season.

It's a powerful film will great performances by Jackman and Hathaway and a unique approach by Hooper. Many films have the term epic tossed upon them, but "Les Misérables" is truly worthy of the word.